Here’s my current progress on a VR blood vessel demo. It looks so much cooler in VR, but here’s a nice 2D version to give you the best experience outside the rift. Lots left to do, so suggestions are welcome! 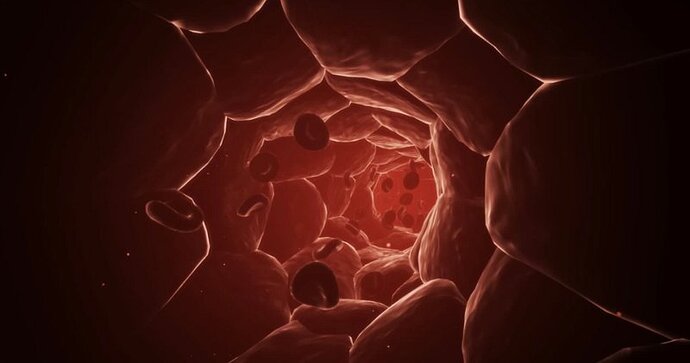 This is just awesome. I can imagine what it’d feel like in the DK2. It reminds me of Fantastic Voyage a lot.

Thanks! The headlamp casting shadows from every red blood cell is just a lovely experience. With 4.5 raytraced shadowing based on distance fields… I may have to integrate that, since there is only one dynamic light, I might be able to afford it and keep 75fps!

Fantastic work 3dlight! I am with cccprobot on this one. I can not wait to see this in the DK2. Keep up the great work and be sure to keep us updated as you progress along in the development of your project! Have a great day!

I’ll be updating it. I plan to add:

BTW, I now have dynamically tessellated (displaced) white blood cells as particles, and there is not really any slowdown! That’s crazy!

This is definitely something that i have wished someone would make for the Rift, and what you have so far looks really good

This is definitely something that i have wished someone would make for the Rift, and what you have so far looks really good

I would love to work on that. For now, I’m pretty excited to just explore a bit more vessel, and a functionally accurate heart with all the ventricles, valves and flow working properly. Imagine that as an educational tool!

I know I’ve mentioned this earlier in this thread…but ever since I saw Fantastic Voyage as a kid http://www.imdb.com/title/tt0060397/ it’s the kind of simulation I’d love to experience…if you haven’t watched the movie, do…it’s from the 60’s, yes, but it’s a classic…

Quick update to the Blood Vessel demo. Now includes dynamically tessellated white blood cells as particles. I never expected that to work, especially with performance enough for VR, but it does, and barely slows anything down. (now shown in DK2 format)

Hello 3Dlight! If you need a betatester for this, let me know - i have access to a DK2 device

It looks awesome so far.

This looks awesome. This definitely does remind me of Fantastic Voyage. I like that you took this idea and went VR with it. Keep up the great work.