AGE OF ARK - submitted into the modding contest 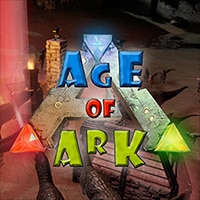 “Age of Ark” is a new competitive multiplayer total conversion mod + a new map that creates a faster and more strategic gameplay. This mod uses aspects from RTS games such as Age of Empires and Starcraft to simplify the gathering/taming/crafting/building of Ark: Survival Evolved so the players can focus fighting and strategy.

GAMEPLAY
Players start on a platform in the sky. When the desired number of players/tribes have joined everyone is given a parachute and 1 player from each tribe is given a Town Center. Players have 60 seconds to jump off the platform before it collapses. Tribes make their way to a safe location, place their Town Center, and start collecting materials to construct a base to craft new buildings/upgrades. Town Centers have 3 important upgrades: Stone Egg, Bronze Egg, and Iron Egg. Crafting these blueprints is expensive. The eggs created from these blueprints are used in crafting sequentially more powerful items.

Each building has unique upgrades that are contained in crates. They need to be placed for the player to receive the blueprint from inside. Dinosaurs that are crafted are also contained in crates. Place them on the ground and the dinosaur will burst out! Every blueprint is accessible if the player is willing to pay for it. Don’t have the resources to craft a blueprint for a certain item? Just go steal it from an opponent! Love weapons that the opponent is using? Eliminate them and take it. They might even have dinosaur crates!

The goal of the mod is to eliminate all other tribes. While a tribe has a Town Center placed the team can respawn infinitely. When a tribe does not have a Town Center all their players have a light beam above their heads alerting everyone to their location and when a player dies that player is permanently dead.

MAP
The map is comprised of a circular center area with lots of resources and surrounding it are 8 forested plateaus. The plateaus each have the same amount of resources on top and are the perfect location to start your base. Each of those plateaus can be scaled through 3 entrances: one on the front and one on the left and right.

STABLE
Home to your run-of-the-mill land-based dinosaurs such as Raptors and Carnos.

TOWER
A late game tower that fires at advancing hordes.

MARKET
Here a player can trade any resource for 20 of another resource. Traded resource rates are mathematically balanced to each other based on the approximate amount available on the map and the time they take to collect.

TOWN CENTER
Defend this for it is the center of civilization. Research and craft the next tier of egg to advance your technology. If this building is destroyed and a player on that tribe dies they are eliminated.

ARMORY
Arm yourself to help your tribe.

WALL
Cheap and quick way to slow down enemies.

FUTURE FEATURES
I created this in ONLY 3 weeks for the modding contest, so I had to just make the core gameplay and none of the fancy features I had planned. I have a list somewhere…

STATUS OF THE MOD
Its working! If you find any bugs post them below and I’ll get to fixing them.

I really like this idea. Let me know if you need any help with landscape.
-For your issue try a smaller picture.

Weird, it worked… I made it 200x200 at 94kb. Now I just have to figure out how to set my GUID back to what it was then I can upload the new version.

Ha that was the same error I was having with trying to upload mods, glad you figured it out. Mine was the picture size as well. Doh!

Mod is the mod file that’s saved.
The ID is the important part, you can reset the GUID whenever.

Thanks everyone! Its working and my bug fixes are uploaded now :D.

Thanks everyone! Its working and my bug fixes are uploaded now :D.

Hope you created another Workshop Item for this since you are not allowed to update your contest entry.

Would be a shame to it disqualified.