If a packaged game starts up in fullscreen mode, and is then changed to windowed mode during run time, it’s stuck in top left corner, missing its tilebar. It cannot be grabbed and moved around

If game mode is changed so mouse is accessable, you can grab the corner of a stuck window to nudge it a bit. The title bar then pops up, and you are free to move window and change fullscreen modes without issues. Until next restart.

If GameUserSetting.ini has been modified to use FullscreenMode=2 (Windowed mode), it works fine, and you can change screemode back and forth without issue on game start. 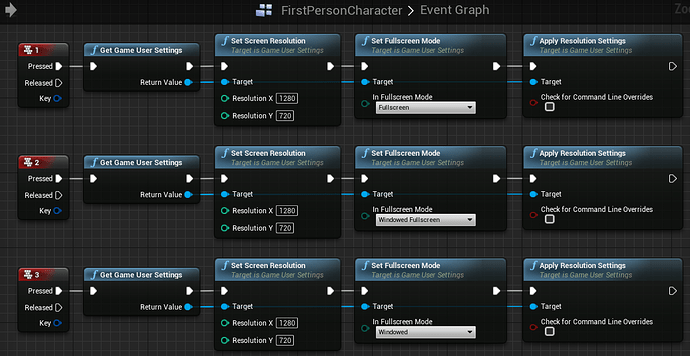 I’ve been able to reproduce your issue, and have entered a bug report, UE-32842. Thank you for your report.

We had a bug that seems to be related to this. When starting the default is windowed fullscreen. Later we changed it to fullscreen. Then (after starting the game) some of our menues cannot be clicked anymore. Setting FullscreenMode=2 in DefaultGameUserSettings.ini fixed the bug.

UE-32842 has been reported as “Cannot Reproduce”. 4.13 preview 1 changed default gamestart behavior, so the steps to replicate bug is outdated.

A packaged game in 4.13 preview 1 starts game in windowed mode.

A packaged game in 4.12 started game in windowedFullscreen mode.

The new steps to replicate the issue in 4.13 preview 1:

Result: The window becomes stuck in the top left corner of the monitor and the title bar disappears.

Expected: The window would appear centered and would not lose the title bar.

This issue also appear at startup if Game User Setting is saved with fullscreen, then game is restarted and player changes to windowed mode with 3 key.

Thanks for the updated steps. I’ve been able to reproduce the issue, and have reopened the bug report with this information.

Hello, the issue has been marked as solved, but the problem now appear when going from Fullscreen directly to Windowed. (Pressing Key 1, then 3) (4.13 Release)

Could you please open a new thread for this new issue in the Bug Reports section so that I can track it separately in case it warrants a new ticket?