Why would a Native AnimNotify not show up in the editor?

According to this post, creating a new class derived from UAnimNotify will show up in the menu in Persona when trying to add new animnotifies. I used the given example code in the post to add a new one (though I had to add implementations for Notify() and World() ). 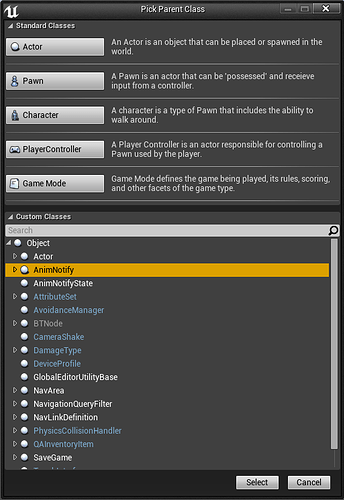 Hi guys, happy Monday! We’re kicking off the week with an Animation Notifies blog post from Benn Gallagher over at Pitbull Studios in the UK. Enjoy! [HR][/HR] Blueprint Notifies Blueprint notifies are a way to trigger some custom logic defined in...

Any reason why a new native AnimNotify would not show up in the editor? Thank you.

Notifies with the Abstract markup in their UCLASS macro won’t show up (as expected since they’re abstract), but blueprint child classes of that abstract class will also not show up (I don’t know why).