Why won't my Utility Widget update a Texture Target during simulation?

I have a script setup in one Utility Widget (functions as the controls) that changes the views of a HUD created in another utility widget (functions as a pop out viewport). The combo box switches between the 4UP view, the five different default camera views (that will always be there), and a FreeCam “view”. The FreeCam item in the combo box is supposed to function as the viewport for any other assets that have a perspective per level this is used in. This is where I am having problems.

These other assets that qualify for the FreeCam, get a tag and Scene Capture Component 2D added. The Tag adds the item to the combo box and the component enables the view to be turned into a material texture for the HUD it will be displayed on. Through troubleshooting and testing, I know that it works outside of simulation, but it does not work during simulation. When I select the actors that would be “FreeCam” assets, the Texture Target does not update until after I stop simulation. My buddy and I believe it’s because this is coming from a Utility Widget seeing how we had a similar problem with sending signals from the control UWidget to the viewport UWidget. 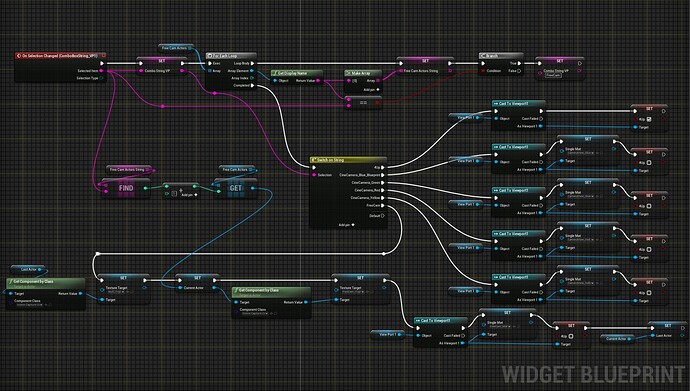 So how can I make the Texture Target update during simulation by sending the command from a Utility Widget? By the way, I am rather new to UE and I get visual scripting but don’t know any coding.