Hi
I’m working on with CADs&UE and for now learning smart ways to use Visual Dataprep. I’m trying to learn what I can do at UE’ side that I don’t need to depend on third party softwares (CAD tessellation softwares, 3dsmax, InstaLOD etc) and I’m quite puzzled how UE is doing texture UV’s to the model.

I want to make automatically clean texture UV’s to channel 0, but I found out that it gives you different UV maps depending where I put Generate Unwrapped UVs operation on the graph. I’m satisfied how lightmap (UV Channel 1) is made but channel 0 is mystery for me.

Example
I have sphere which diameter is 30 cm, made by Autodesk Fusion. On Visual Dataprep I have three operations:

Situation1: If I put Generate Unwrapped UVs first on the line, I get this kind of UVs:

Which I also find interesting that, if I use normal Datasmith import (icon on scene), I’ll get same results as situation 1. If I use Generate Unwrapped UV in the mesh editor with same settings as Visual Dataprep I’ll have same result as situation 2.

What I want to achieve is to have same density in all meshes. I found out this kind of confusion when I tried with this model. I’m also interested to hear how Visual Dataprep is doing import tessellations before execute. 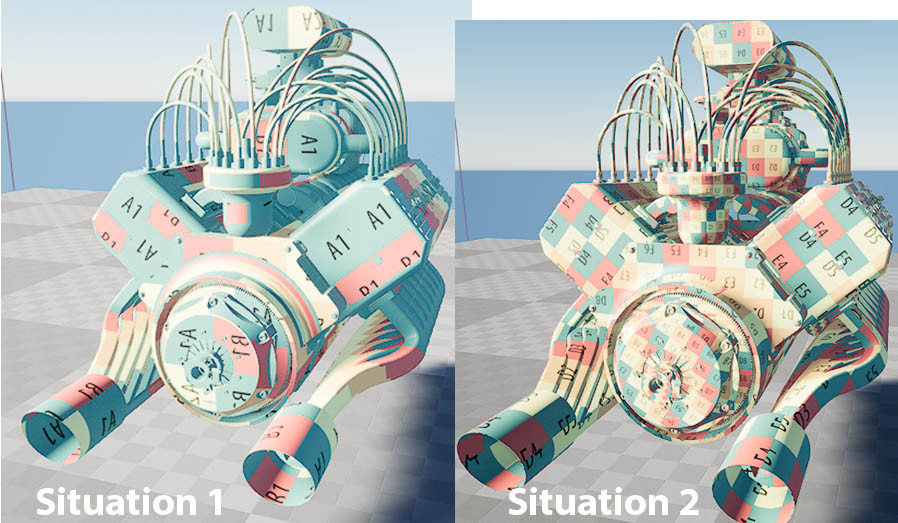 Thank you for your feedback.

The tessellation node operator regenerates the mesh data a will override UVs if the generate UVs node is used before that.

Thank you for your feedback.

The tessellation node operator regenerates the mesh data a will override UVs if the generate UVs node is used before that.

Is there any solution to effect texture sizes or textures direction if I have to work with the project where the result is something like in the Situation 2 picture?