Why no return function

When I programming, I use this function so many times that I cannot program without it but there is no such function in blueprint.

Just why, as example if I I want to modify an input value of a function with a branch or anything other than a function, I cannot.

in this particular case you could easily use a select node along with your bool. the select would output a number based on whether the bool is true or false.

Unfortunately it don’t work without other functions than just a simple return as in my example, too complex.

The select float don’t have exec as input.

By the way I missed a wire in my example between exec output of Return and the exec input of Add movement input.

Else I tried to add multiple float value of Select float to Scale value, but it don’t work.

below are 4 ways to accomplish the same thing as in your picture but with existing nodes. select nodes dont need an input as they are read when called. for example in the example 1 below, when the add movement node is called the value of is backward will be read an passed to the select node which will decide which pin to use and pass the value to the add movement node. example 2 shows using a static value and is the same as in your picture. example 3 is the basic way to control movement as seen in the template projects. and lastly the 4th example uses a variable and set it just prior to using it (this is only really useful if you want to make sure a value is reset before using it.

basically theres no need for the node your requesting. im not sure what coding language you came from but in blueprint its just unnecessary. 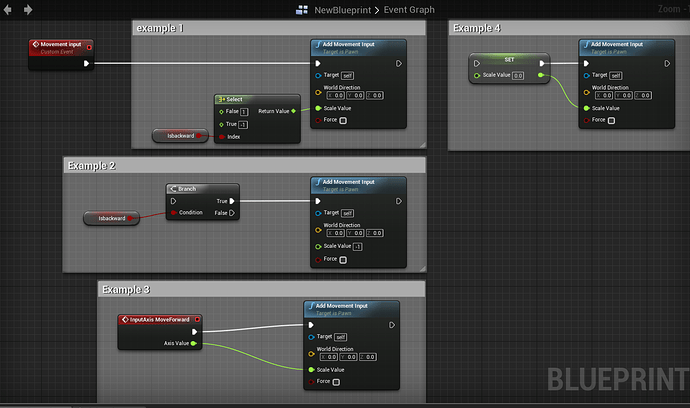 I actually do the example 2

And the example 4 just extend the issue. 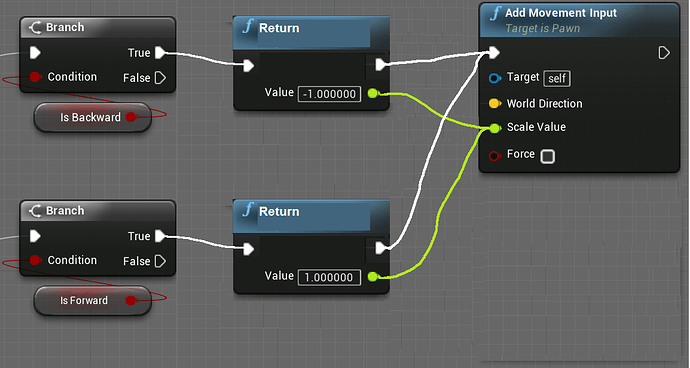 if your having input like this its either going to be in the forward or backward direction. so the way your trying to do things isnt efficient. for example if the input is down and your not going forward then that implicitly suggests you want to go backwards. so you can eliminate the branch node and just use a select. example 2 is exactly the functionality that your imaginary return node does so it renders it redundant. for basic movement i would say that example 3 is the proper way to do things. for example 4 you could duplicate those nodes and have one come off the true pin on a branch and another set off the false. example 4 is again redundant from just setting the values manually.

the bottom line here is that the return node you are looking to have added would add no functionality to the blueprint language and would in fact just add clutter.

ok so I forget this optimization.