Why isn't Play Montage available in an animation blueprint? 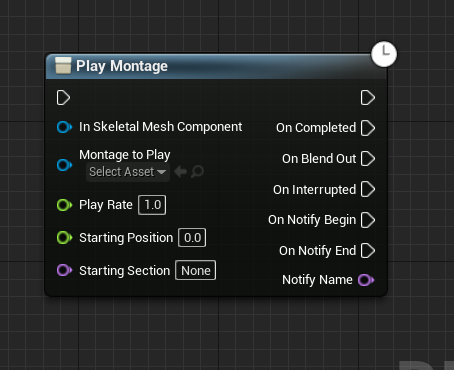 However it’s not available, even when I try to pull it off of a character or skeletal mesh reference. I tried copying and pasting the node from another blueprint, and it says “One or more copied nodes could not be pasted into this graph!”

I’d like to use this node because of its expanded output behaviour which gives me access to various delegates, and I want to keep my animation-specific logic in my animation blueprint

If that didn’t help you out feel free to ask more questions here in this topic.

I’ve used this node inside of macros though. Can you explain why it can’t be used in a function or an event graph?

I want to keep my animation logic separate from my main logic. In my mind, I wanted to control stuff like blend out notifies in the same way you use regular anim notifies.

I wanted to do the same thing here for other animation montages that are a bit more complex and I wanted to use the Play Montage node to enable reacting to the blend out event.

Is my architecture for the reload sensible?

Is my architecture for the reload sensible?