Why is my moving door disappearing when approached?

I’m trying to set up a door in blueprint and every time I approach it it vanishes, I’m following the tutorial on the wiki for automated doors, I had one working but didn’t need the frame they use in the tutorial so I’ve been trying to get one working with just a door and can’t figure out what I"m doing wrong. Here’s my blueprint 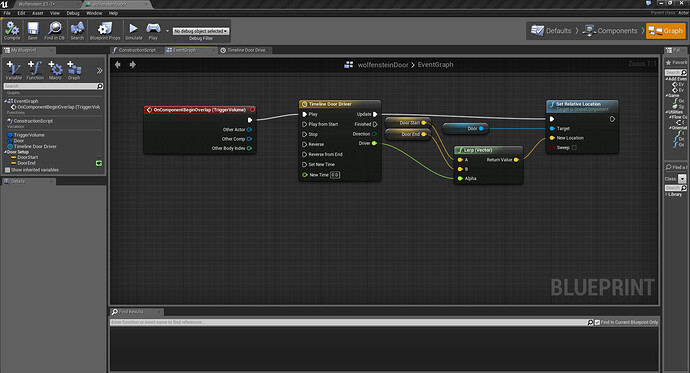 Is it different for a class blueprint? I believe he’s using a Level Blueptrint
I have another that looks like this 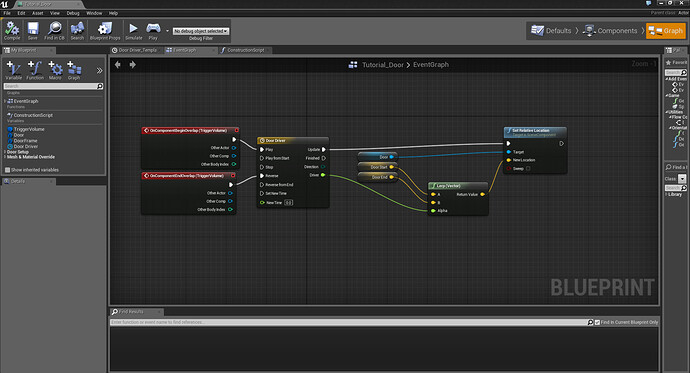 and it works just fine

EDIT I also set it not to move and it still disappears when I approach it.

Watch this tutorial …bec, he will gonna talk about this issue and how to fix it.

you should store the door position at the beginning of the game…then let the time line adding it’s value to it’s initial location at the start of the game.

you should make the door “movable not static”

try first to make the class blueprint just like in the video to fully understand the idea
then try to achieve it using another method.

The video is a level blueprint isn’t it? I’ve followed it I understand it I’m pretty sure it was a level one. The tutorial on the wiki is a class one and I have one door working but my other one is not and I don’t know why.

did you tried debugging while in game and see which node is causing this issue?

Here’s a screenshot of it as I walk to the door, Unless I miss something I believe this is how it should be 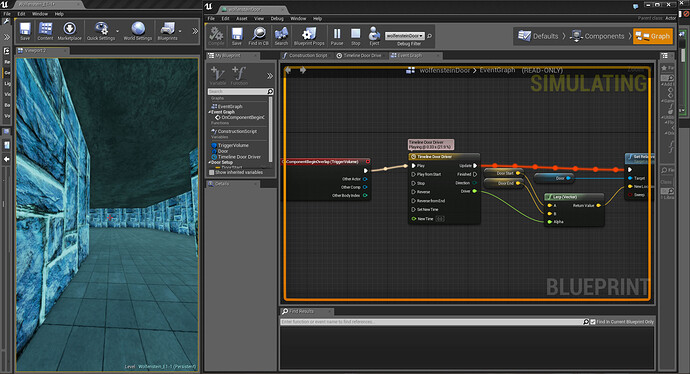 When you are in the game and the door disappears, get mouse control back (shift+f1) und “un-possess” (eject). After that, find the door in the Scene Outliner and check the values. Maybe this helps with Debugging, so you can see the actual door coordiantes.

I know but I have another door on the same system that works just fine, the only difference is the tutorial door has a frame and moves up and this one does not have a frame and I need it to move to the right instead of up, I don’t understand why changing such small things are breaking it

bec. it animate it via world origin not from it’s initial position

It doesn’t matter how many doors you might have in one level; each door must have “x = 0,y = 0 and z = 0” or origin as mentioned above by Omar. This is causing difficulties with any Door animation.

I just want to know why if I’m following the tutorial step by step it isn’t working.

I’m not trying to follow the video, I got the level blueprint working fine, I’m
trying to set up the class blueprint from the tutorial on the wiki here

I got stuck on this for a very long time in these tutorials. It’s simple - you need to ensure that you are animating the door along the correct axis. If you do not have the correct starting position for the door - it will automatically teleport the door to that location and begin animating it there.

I’m posting this here even if it’s a 2 year old thread, in case someone else has the same issue. I had a similar issue as the orig. poster, followed the tutorial had my door disappearing, didn’t use the unreal downloads though. I made my door (the moving part) the scene root, that was what messed it up. Once I rebuilt with a different scene root it worked as intended.