[link text][1]I’d like to ask for a lot of help, please. I sent my game for Apple’s approval and it was rejected. The information they gave me is that my game Crash on Launch when connected to the IPv6 network. I made a video showing that the game was not Crash, but the game was rejected again. They sent me the Crash Log. I’m understanding that Crash Log is occurring for iPhones with arm64 processors. I have analyzed the configuration in the project and I have enabled the option so that the package generated by the Engine has support for arm64 processors but the game was rejected again. Help me solve this problem, please. I’ve been trying to solve this problem for two weeks and I can not. Please, Help me! Thanks a lot for the help.

Link for see my demo video: 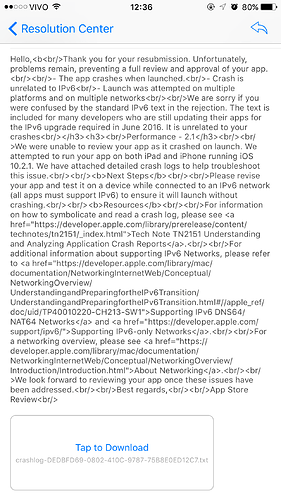 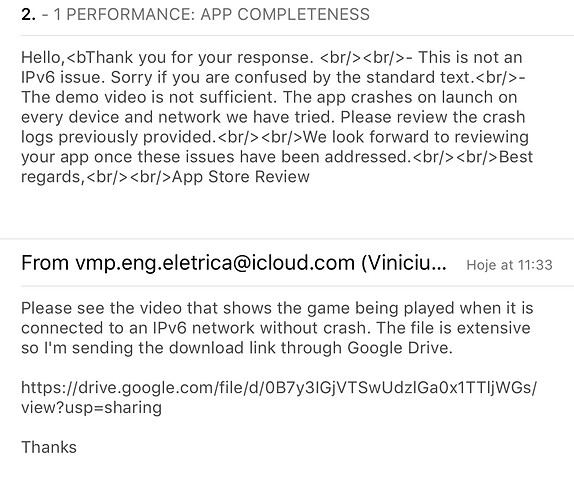 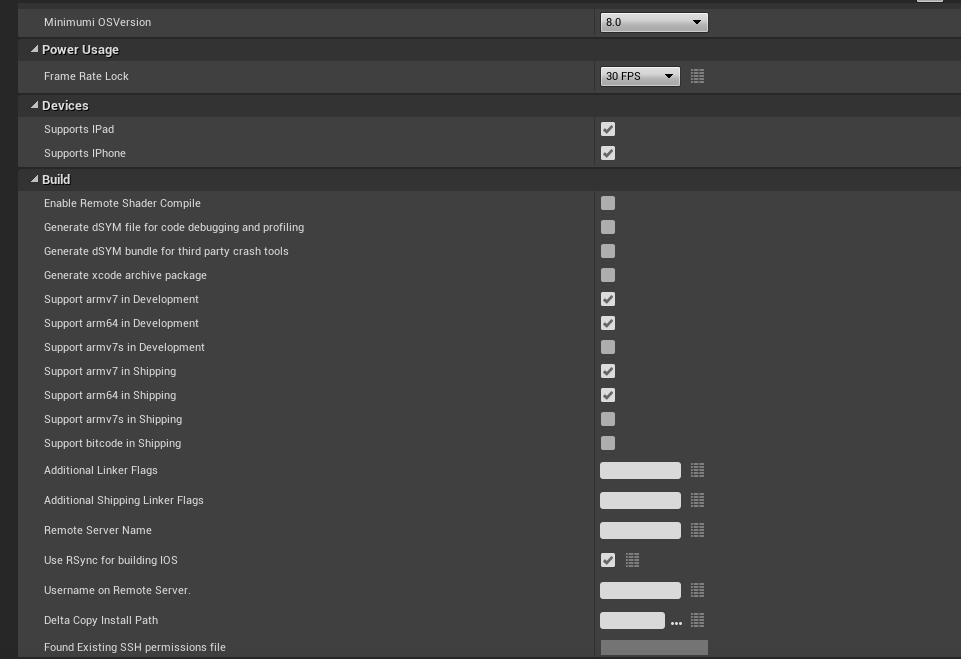 Here are the Crashlog files sent by Apple. Thank you in advance if anyone can help me.

Here Output Log file from Unreal Engine When Launch in iPhone Mobile. Thanks for Help me.
link text

Hello, can anyone help me with this problem???

In my case, I had two problems at the same time:

1 - in the first case the problem was happening because I needed to create an exception for my application to communicate with a server, and when I put the server address, I used numbers and not letters.

2 - One of the problems was simply solved updating the version of Unreal, I do not remember exactly which version was trying initially, but the problem was solved automatically.

I was using a 4.14 version. I’m using a 4.15 version. I will try to resubmit the package for approval with an Apple

The problem for me was unraveled. See the link below. Thanks.

Is it possible to build arm64 for iOS from non source build editor?

Working on a Mac I see that the option for building arm64 for iOS, is no longer grayed out on version 4.13 of the pre-compiled install version of the editor. Enabling it and attempting a build results in an error that makes me think it is not...

The conclusion I was able to get was this: Whenever the C ++ application and compile for Shipping while maintaining support for the armv7 and arm64 processors, the game will crash on launch.I tested the game and kept it enabled the armv7 and arm64 the processors together and the game ran smoothly. I’m facing another problem now. As for crash on launch, this problem has already been solved by compiling the game using Blueprint.

I was able to build a C++ project for iOS using just arm64 support. I also dropped OpenGLES support because all of Apple’s arm64 devices also support Metal.

I could upload the build to iTunes Connect, deploy through TestFlight, and run on device without any issues.

So if you remove support for armv7, you should be able to get a build that’ll work.