Why enum, declared in c++ does not accessible to choose if BlackBoard?

I’ve declared my enum in MyAiController.h:

But this enum type is inaccessible to choose in “Key Type” / “Enum Type” field dropdown menu of BlackBoard in the UnrealEditor (Here:

Looks like only enums declared in UEditor are available here.
But I want to be able to change state in c++ but observe its value in BlackBoard decorators.

Maybe the = 0 is somehow fudging it up? Try it also without any extra metadata to get the simplest possible form. It works for me, and I also generally restart the editor after enum changes too.

Also make sure you are on the latest release version of the engine in general.

I’m having the exact same issue. I declared the Enum the same way (except without the =0 part) and restarted the engine after compiling the code. It’s located in a header file that is listed in my project header file so that it’s accessible anywhere in the project. I can create variables and reference it anywhere. Except I can’t set it as the Enum type in Blackboard. 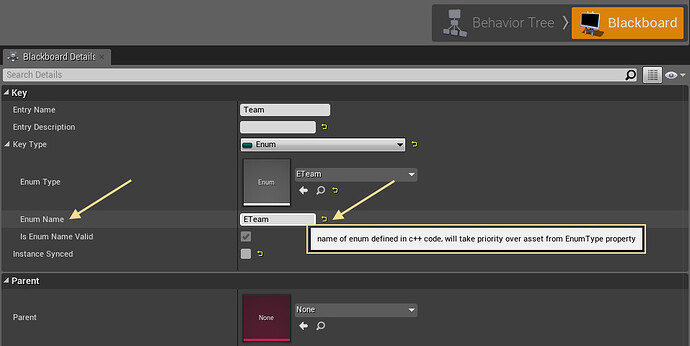 Same here. did you manage to solve this issue ?