Why does this gate not work?

Hello! I’m currently trying to do a line trace for objects, allowing them to picked up. The branch’s true or false nodes work by themselves, The E keyboard event works, but when put through a gate it doesnt work. Any idea why?

The E keyboard event works, but when
put through a gate it doesnt work.

A gate always works as its job is to be either open or closed. So not letting things through is also OK!

It does not allow the execution chain to proceed because it’s closed when the button goes down. Print that AND condition and see that it’s False. Also, if you never execute anything in that Branch, the Gate will stay closed by default.

Seeing how this is a singular action event, perhaps you do not need a Gate to start with. Consider hooking up E to the Branch instead and execute the desired script on True.

Input is not as easy as it seems, actually; that’d due to Consumption.

Blueprints will compete for input and Consume it in a very specific order and with specific priority. As a general rule of thumb, you should be handling input in as few places as possible:

Handling input in any other actor is asking for trouble. That’s unless you have special gameplay needs which is more than understandable, of course. 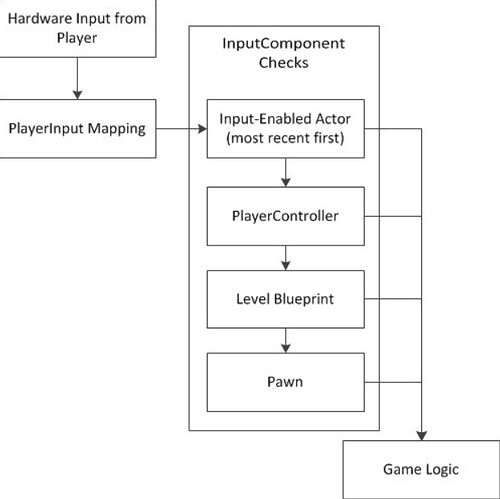 If you E in the Level Blueprint and E in the Pawn, the E in the Pawn will not trigger. This consumption can be overridden but it is not recommended unless you require specific functionality.

It may seem tempting at first to enable input on actors but it can open a, ehm, Gate to a little debugging nightmare

Thank you so much, this works!
As an aside, my E key didnt work for ages until I just deleted some starter content and other stuff until it just worked. Is this a normal occurrence or…?

Yknow, for all the help, I’ll allow that pun. But that makes alot of sense now that I think about it, Although wouldn’t it make more sense to have E run in the level blueprint first, then like a delay of a frame or so for E to run in the pawn?

Ideally you make an entire game without ever touching the Level Blueprint in the first place (I know, shocking; using LB is tempting). If there really is unique functionality that goes into that particular level, then that’s OK, I guess. But functionality should be tied to actors, not to the LB.

This way you can make a box and a player that can open it. Ensure the player has the functionality allowing them to operate on the box. You can now drop these objects into levels. But there’s no need for the level to participate in all this.

Although wouldn’t it make more sense
to have E run in the level blueprint
first, then like a delay of a frame or
so for E to run in the pawn

That’s why Pawn possession is a thing. You posses a Pawn, it has its own controls and can even work with what the Player Controller is requesting.

I’ll just add that if you’re creating an interaction system for objects, it might be worth looking into how Interfaces work. In short:

This allows you to implement unique behaviour in the object itself. Behaviour that the player does not need to know about.

This way you do not need to worry about cascading Branches and checking whether the trace == apple string. You hit something with a trace and send it E, the item decides what to do with that action.

Wow. That would be so much easier. Although I’m kind of confused on how to implement it. I have a interaction system interface now, with an apple function. How would I link this to my currently existing system? I.E would I just plug the function directly to E, set the string to the currently traced object and then compare it directly in the apple bp?

Thanks again! I’m sorry to keep bothering you
Enjoy your day

Is there a reason you’re doing this? As in, is this a puzzle game with words where you must compare them? String comparison is generally frown upon: deemed unnecessary, prone to errors and very slow to execute; unless you’re chopping and reassembling sentences together that is. Then it’s a must.

have a interaction system interface
now, with an apple function.

Just to be on the same page. We’re talking about this interface, right?

Not really, It’s more of like a survival game, and tracing to see if an object can be picked up. Most of this blueprint is kind of hacked together, seeing if it works.Don’t really know how else to determine the object traced.

Yeah, that type. Although I know its simple, I’m still pretty confused on it, even after looking through the video. Tried looking through the source files they provided but they just lock up while initializing. I have a “interact system” interface. In it, what should I do? Put the trace compare in there, or put a “is berry ready” thing in there or just Booleans and things? And would I access that from the first person character, or the object?

Also, I’m sorry if i’m pestering you, I’m just really confused. Thank you so much for your help! 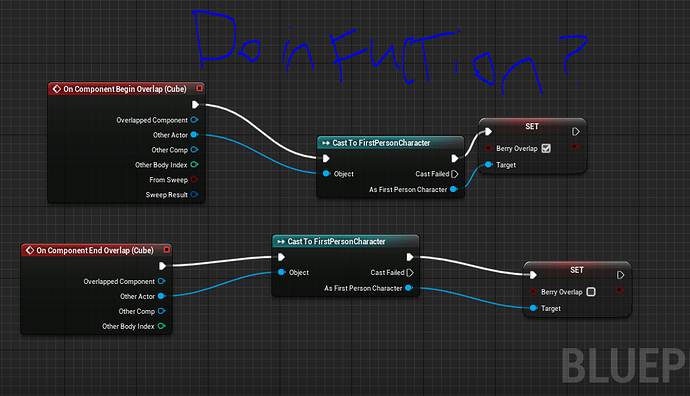 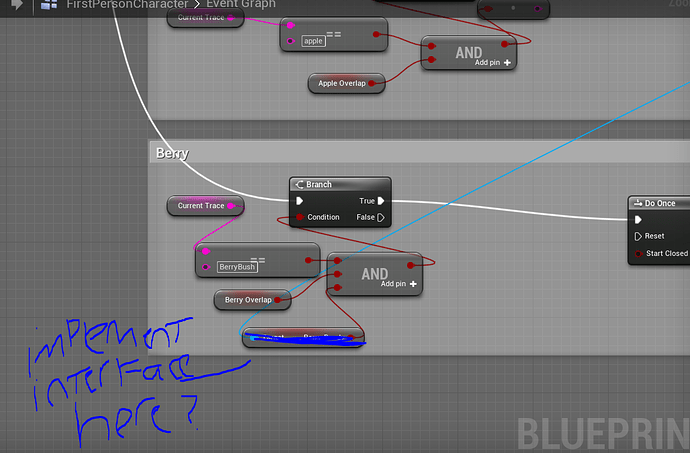 And would I access that from the first
person character, or the object?

(I’ll keep posting as I find time between other tasks, the examples will be somewhat crude but stay tuned) 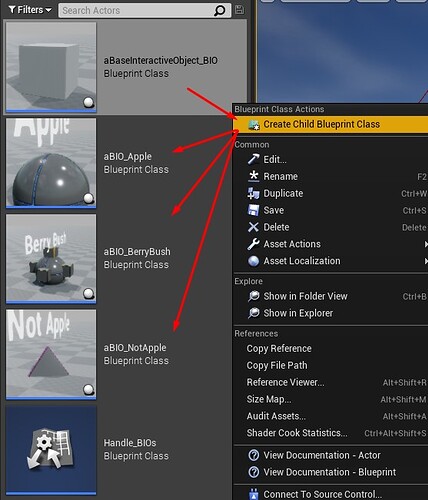 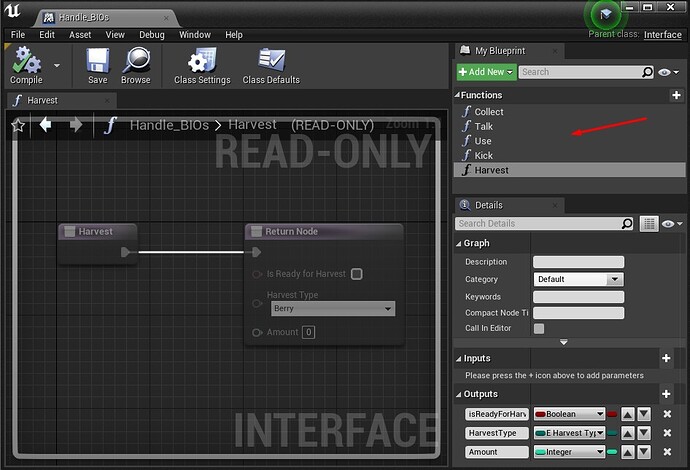 This is the base class: 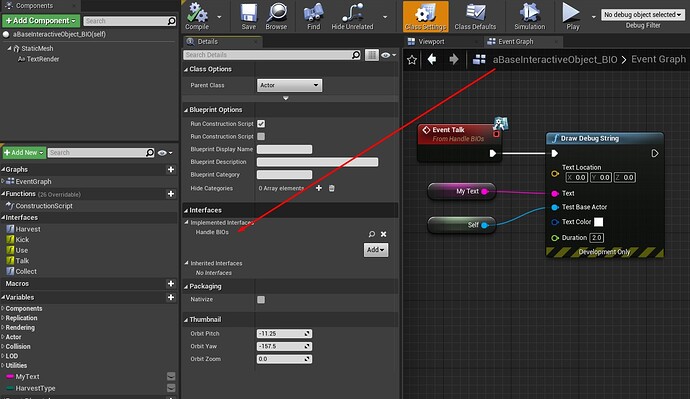 Here’s how the player interacts with the world:

And if you ask an actor with no interface to Talk (click the ground, wall, water, etc…), nothing happens. Which is great.

The NotApple (and only this one child) actor overrides the Event Kick from the interface its parent implements:

The player doing its thing:

Interestingly enough, the Berry Bush is utterly unfazed by all this nonsense. It does understand kicking and could do something about it but has yet to implement a reaction.

How it looks from the player’s perspective: 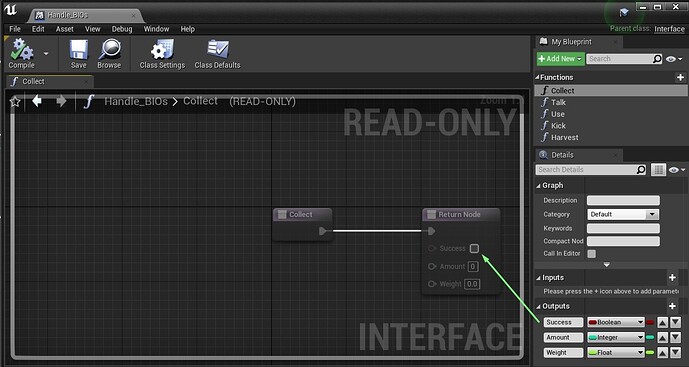 Harvesting Berry Bushes is next (not sure when, though)

So here’s the Berry Bush situation.

It would be nice if the bush could communicate with whoever is picking the berries. So the player also has an Interface now through which they can receive messages from other entities in the world.

Here’s the player harvesting stuff from the world: 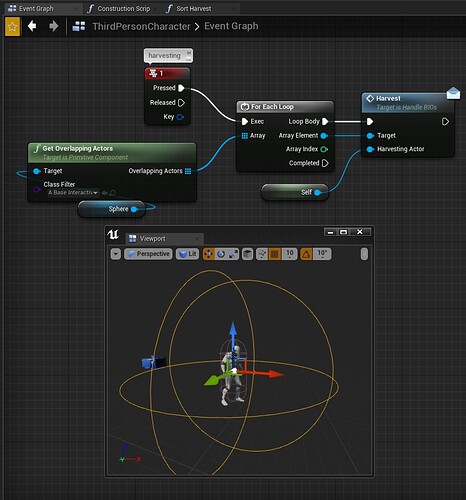 The above is just an example, sorting can be done much better and inventories are another topic altogether.

My god, dude. You went above and beyond with this. It makes alot of sense now! I think I finally get it.
Only problem is, sometimes some of the interface parts are “not blueprint callable”. Any idea how to fix it?

Besides that, honestly I’d pay for this kind of help. Your a great teacher, atleast to me.
If this project goes anywhere, I’ll let you know!
Enjoy your day!

Examples of the errors right here. Is this just an option in the interface to fix it or…?

Thanks, and enjoy your day. 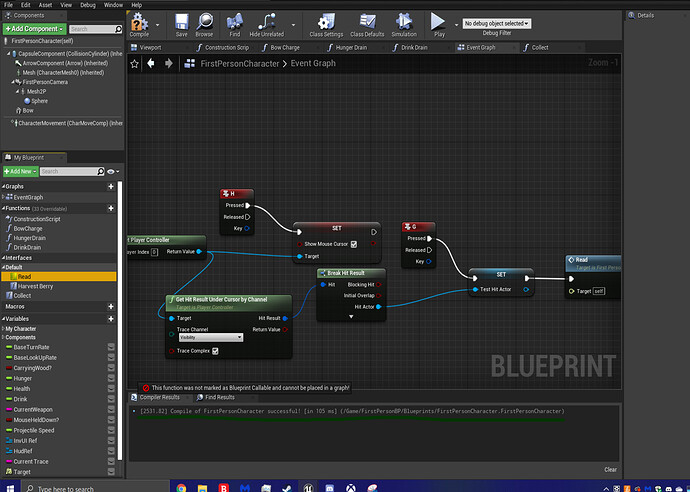