Why can I rotate a blueprint class actor?

Why is it that my actor wont rotate? I have tried a large amount of solutions on answerhub, but none of them have seemed to fix my problem. Here’s a picture of the method i’m using, and yes, I have set up the animation for it to rotate, because “change location and rotation” wasn’t working either. 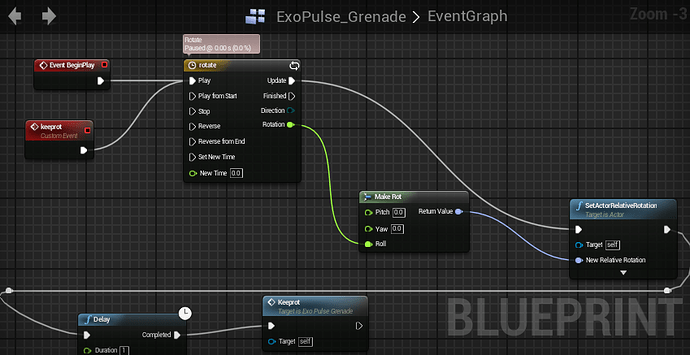 If you set a watch on your rotator or roll value, can you see it change over time?

Is your actor locked in rotation, or has any axis giving rotation? If so, they will take precedence over this.

By “Set a watch” do you mean print the rotation values every 0.4 seconds or so? If that’s what you mean, then yes, I do see that changing, but it has physics enabled so it could be rolling.

Locked in rotation? Axis giving rotation? Could you explain a little further?
Thanks!

Btw, don’t you want Yaw instead of Roll?

I mean that there is a tick box in the actor somewhere, either class default or component that says “lock rotation” which would stop the rotation. But I think it’s because you’re using roll.

As for the checkbox, look in the class default of the actor, or the movement component, search for “lock”

There is no checkbox. And yeah I do want it to Yaw, I just forgot to switch it back for the picture. I have tried the rotation component, however I have a poor understanding of it, should it work automatically if I add it? I have added it and played with the majority of the settings, but sadly, nothing happened.

I have already checked, there was one thing for lock that came up, but nothing like im looking for, nothing related to the movement. and it is movable

Update! I found the problem, my sphere wasn’t the scene’s root, so i was moving the root, and not the sphere!