Why are those two rates specifically recommended? Really the question is why is 44100 recommended, as 22050 makes sense given 44100 (22050 is exactly half which means 2x upscaling a single frame would fit perfectly into one 44100 frame).

Initially I thought that Windows used 44100 by default, but I checked my machine (after hitting restore defaults) and saw that it was actually 48000.

Anyway, just wondering if there was a deeper reason to this recommendation than I’m understanding. 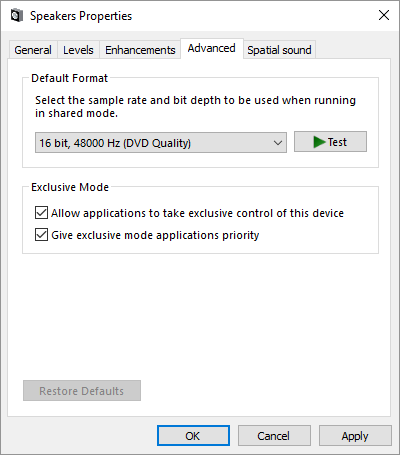 The Engine will support any sample rate, but any sample rate mismatch between the source file and the user’s device settings will require a real-time sample rate conversion (which is linear and can result in artifacts).

My recommendation is to select your source sample rate deliberately.

If you have a source sound which has no audible content above 12kHz, then it is a waste of space to store it as a 48kHz file. Know your Nyquist Theorem, always:

The Nyquist–Shannon sampling theorem is a theorem in the field of signal processing which serves as a fundamental bridge between continuous-time signals and discrete-time signals. It establishes a sufficient condition for a sample rate that permits a discrete sequence of samples to capture all the information from a continuous-time signal of finite bandwidth. Strictly speaking, the theorem only applies to a class of mathematical functions having a Fourier transform that is zero outside of a fini...

@dan.reynolds Thanks for the quick response and information. Let me restate what you said to make sure I understand:

Regarding the Nyquist theorem: I don’t know how to use it to automate my selection of sample rate. The only way I know is to resample the audio, play and listen, and subjectively evaluate the result.

The reason for this question is that I’m making a simple script to process audio I get from various sound effects websites so that I can easily import them into UE4, rather than opening Audacity and processing them one at a time like I was (IMO this is the biggest advantage workflow-wise that Wwise has over the new UE4 audio system). In addition to the container format/codec conversion (the only real requirement to get the audio into UE4), I also wanted to automate downmixing stereo to mono for spatialized sounds and also resampling from high sample rates (e.g., a lot of my source audio is 96000Hz) to Epic’s recommended rates (hence this question). I had thought the 44100 recommendation may have been an outdated, historical artifact due to Windows previously defaulting to 44100… but as I’m only looking at my computer, I don’t know how common 48000 actually is.

IIRC, @Minus_Kelvin mentioned in a video (can’t remember which) that there were plans to make UE4 audio import to handle more formats, so this is just a stopgap measure until that is available. I’ll share the script on github when I’m finished with it later today… or if something like this already exists, tell me now and I’ll stop wasting my time

There is not something deeper to 44,100 Hz being standard at all. 44,100 Hz as a Sample Rate was set as CD standard (Red Book Audio) because of NTSC and PAL scanlines rates for audio encoding on Television signals.

In digital audio, 44,100 Hz (alternately represented as 44.1 kHz) is a common sampling frequency. Analog audio is often recorded by sampling it 44,100 times per second, and then these samples are used to reconstruct the audio signal when playing it back. The 44.1 kHz audio sampling rate is widely used due to the compact disc (CD) format, dating back to its use by Sony from 1979. The 44.1 kHz sampling rate originated in the late 1970s with PCM adaptors, which recorded digital audio on video cass...

It simply became a kind of defacto sample rate because of the proliferation of existing digital audio technologies.

Ideally, your sample rate should be above 40kHz because of Nyquist-Shannon Sampling Theorem which relates frequency fidelity to sample rate.

The conversion scripts I mentioned before are here. I decided not to modify the sample rate on import as I believe it can be controlled during a cook with Sample Rate Quality.