Why am I not able to find Datasmith importer plugin?

Hi I wanted to find out why am i not able to find the Datasmith importer so that i can import import rhino files directly into unreal engine. Other option i tried was an OBJ file import but the obj file seems to be 10 GB once converted from Rhino. ( which is extremely large and crashes unreal engine)

Describes special considerations that apply when you use Datasmith to import scenes from McNeel Rhinoceros 3D.

I think i have the beta version downloaded and signed in. But i don’t see it on the launcher. 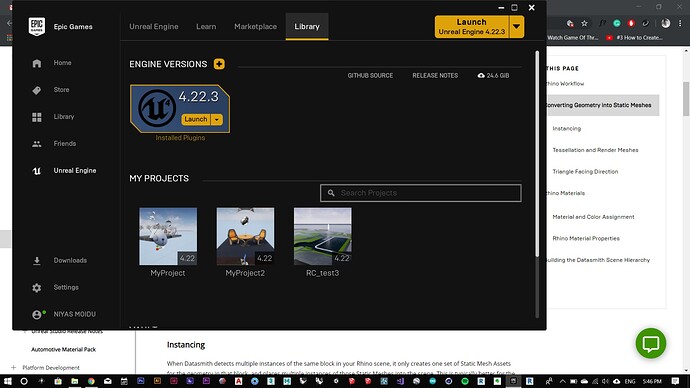 Please try signing out of your account on the Launcher, and then sign back in again. It is possible that the Launcher may need to update your permissions.

You should see a new section below the “MY PROJECTS” session called “UNREAL STUDIO BETA”.

I have confirmed that your account has successfully registered for the Unreal Studio Beta.