Where is "Replace with Composited Blueprint" in 4.7 Preview?

I just recently updated my project from UE4 4.5.1 to 4.7 Preview 8, and I can’t locate the “Replace with Composited Blueprint” option anymore. In fact, I don’t seem to have a “blueprint” rollout in my details panel at all.

I do see a blue “Blueprint/Add Script” button that is new to me, but it disappears as soon as I select more than one object, so I suspect this is not what I am looking for.

Ultimately I am trying to create a new blueprint of an entire room (which I have already built and arranged) consisting of static meshes, blueprints (doors), and a light. Could anyone point me in the right direction?

By “Convert to Blueprint” do you mean that blue button I spoke of that reads “Blueprint/Add Script”? I don’t see an option that reads exactly as you describe.

When I click the blue button, it only adds the root object to the blueprint, and leaves everything else untouched.

The workflow has changed a little bit. Before you would add different actors to the level and then select to combine them into a blueprint with the “Replace with Composited Blueprint”

With 4.7, we’ve add In world component editing. This allows you to add other components to and actor in the level, the same way you’ve been able to in the blueprint editor. In the picture below, I added the light mesh from Starter Content, then in Details added a Point Light by clicking the green add component dropdown, and then drag-n-dropped a cube into the component list from the content browser. You can either leave this as is, and duplicate it as needed in the level, or if you’d like to convert it to a blueprint to add scripting you’ll select the Blueprint/Add Script button. 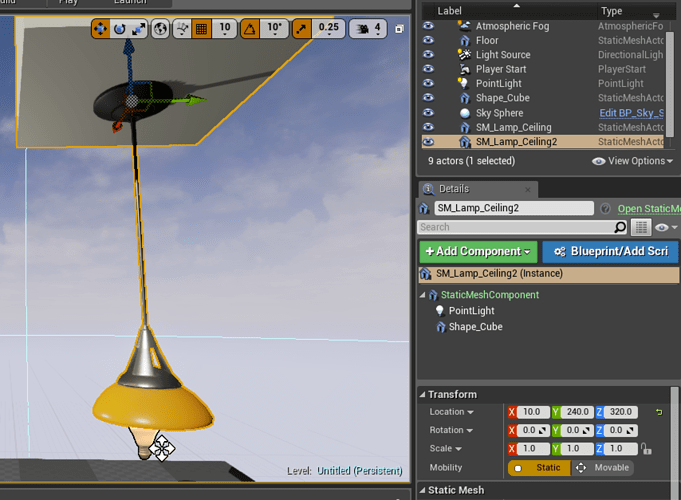 Hope this helps you out

Hmm… perhaps I’m on the equivalent of 4.7P7… I’ll look into this a bit more tonight.

hypersapien is saying when he clicks that Blueprint/AddScript button, his attached components don’t follow him into the new blueprint. Is that by design?

Currently yes that is the intended workflow. When hitting Blueprint/Add Script it is taking that actor and any components you’ve added to it. This is different than attaching them through Scene/World Outliner. Though the idea of being able to change an attached actor to a component would be interesting addition to the new workflow, I’ll throw in a New Feature request for that tomorrow.

Sorry hypersapien, didn’t fully answer your question. Unfortunately you’ll need to build up your “room” again. I would suggest adding an Empty Actor from modes window. From here you can drag and drop the meshes/blueprints you’ve used to build up the room the first time from the content browser into the components section of the empty actor. As you add components you can select them individually to modify how they fit together as if they were their own actors in the level. I’ll see if i can throw together a quick video/gif tomorrow when i’m back at my desk.

So is there no longer a way to select multiple actors in the world and convert the entire set to a single blueprint, and that the only way to do this is to use the Add Component button?

Its ok, I dont think it will be too much of a burden to re-construct it. I may return with more questions if I have trouble following the procedure you described.

Quick video, there will be much more coming soon from our awesome Docs team

but hope this helps in the mean time.

We still have the old functionality as well, we just moved it up to the Blueprints dropdown in the main level editor toolbar. It’s now named “Convert Selected Components to Blueprint Class…”

Here’s what you’re after: