When will "arbitrary orientation/gravity directions for characters" be implemented ?

Im working on a mech project where the mechs have (magnetic) wheels on their legs and a jetpack to boost and therefore can drive on walls and the ceiling if they go fast enough.
I took a break from unreal for several month because of this: 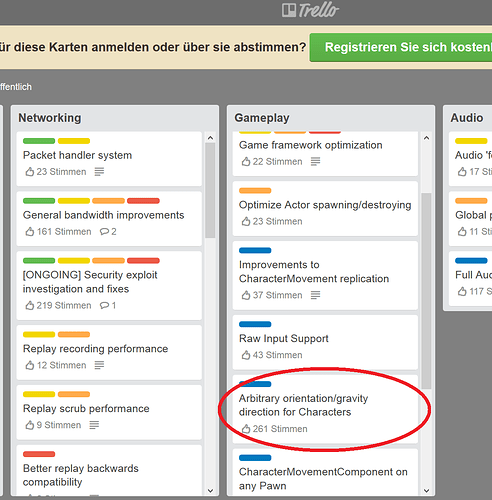 At first I didn’t thought that it was such big of a deal because it got "greenlighted"several times,with a concrete releasedate on trello.But every time it got pushed back further and now there is not even a releasedate at all anymore.

I really would like to finish my project because it went a lot of fun and work into it.

Does anybody know if they are still willing to integrate it in a somewhat decent timeframe up to 3 month from now on?
They keep delaying this one several years now and the demand for it in the community is quiet decent.I saw many posts over the years from user who requested it
heavily.I don’t get it why they constantly prioritize every little feature over this one important gameplay feature.

-do they not now how to code it?
-is the engine build in a way that it is difficult or even impossible to implement it in a reliably way?

p.s: is there a way now to transfer UE4 from one computer to another without reinstalling the launcher over the internet?

There is a guy who has done an engine modification to allow this. Look up custom gravity and you will be able to find it somewhere. Also there is a plugin available on Kitatus that can let you do this too. Has been posted up quite a lot recently. It’s not that difficult to integrate into the engine im sure but it’s a niche requirement that doesn’t benefit a huge number of people so they have plenty of other things that are coming along first and since other people have already built the functionality there isn’t a huge urgency for them.