When too quick to close editor and launcher, you get a blue screen in win8.1

The repro is always the same;

What I mean by Close the launcher before the editor has “finished” closing, is that It seems that windows is still in the process of shutting down the editor even if you do not see it on screen.

The number of application doesn’t seem to be a factor here but normally, I have Chrome open with 9 or so tabs open. Might have VS2013, Photoshop or MAX open as well. But it does happen when only chrome is open.

I know bugs can happen but when it crashes my entire system, then it’s a big concern, especially for data corruption.

thanks and keep up the great work guys

In order to determine the cause of your blue screen, there is an application built into Windows called the ‘Event Viewer’ which generates and organizes logs for your computer. Follow the instructions below to track down the cause of the blue screen so we can determine if it is in fact the Editor and Launcher and not another application or program.

Simply press ‘windows key + w’ to pull up a search and type in ‘event’, then click on ‘View Event Logs.’ 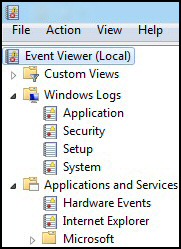 Microsoft Windows 8 Event Viewer. These 3 panes provide the tools to investigate your logs. You can examine the System, and Application logs, also Hardware Events.

Find the text log file of your most recent crash and determine whether or not it was in fact the Editor and Launcher causing your computer to blue screen. If you are having a hard time determining this, you can send me the most recent ‘Critical’ log file and I can take a look.

Thanks for the reply. so here’s what I got…

In the critical,txt file, it seems to be reported after the crash.
In the error_kernel_event.txt, we seem to have the same thing.
In the error_bugCheck.txt, here is where I found that a dump file was created
And In dumpFile from crash.txt, this is where it mentionnes two interesting thing in the debugging details section:

Hopefully this helps you out.

All of my drivers are up to date. I actually had to downgrade the driver for my second video card (on which I don’t “use” UE4). I’m still monitoring the situation. But it’s kind of weird that it only happens with the editor.

I notice the log mentions WIN8_DRIVER_FAULT. Have you made sure all your drivers are up to date, especially your graphics driver?

Do you happen to have a Solid State Drive installed in your system which has UE4 loaded on it?

No, It’s installed directly on my internal HDD (SATA)

I have to say that I haven’t encountered the situation since downgrading the Intel driver, But I also am more careful when shutting down the editor.

After spending some time with your logs, I can say that the Engine may have triggered the fault but the issue resides in a specific Windows Driver (ntkrnlmp.exe). Chances are the update that you are referring to corrected the issue with this driver and you will not have anymore issues. However I ran a quick search on the driver and found that it seems to be connected with the Computer’s readyBoot (Sleep) process and more often than not a simple upgrade to an incompatible driver corrects the issue.

thank you for your help. It’s greatly appreciated. And it’s great to see that Epic really cares about the community