Whats up with Matinee?

One of the awesome features in UDK is the Matinee editor – It is super easy to use and very intuitive. I have found that the Matinee editor in UE4 is pretty unstable. I’d like to start this post in order to get the ball rolling on some odd problems.

Thanks for the quick response Jacky!

Is there any info on the sequencer? What is this awesomeness you speak of?

Regarding the first two corruption issues: Referencing the same object in more than one matinee’s can cause problems, so that might be the issue you are seeing with duplicating it in the same level. And are you fixing the referenced objects in the matinee actor after you place Matinee into the other level?

Also Matinee working with Level BP only isn’t a bug. It’s just a limitation of Matinee. You’ll have to wait for Sequencer for more flexibility.

It is still some months away from release so not much is known about it really. It will be used in class blueprints as well and have more functionality though. You can see a screenshot of its interface here: 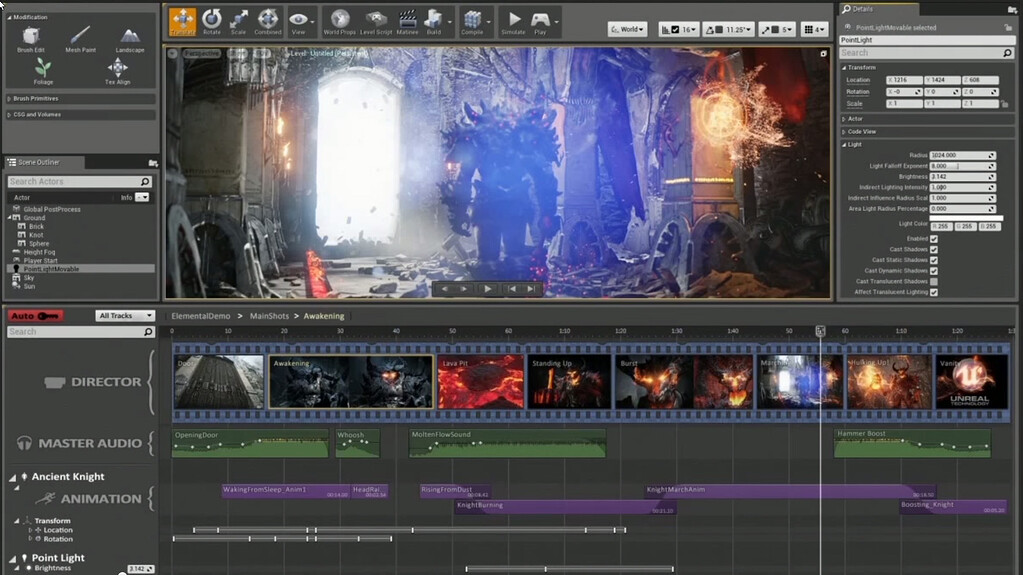 Hello Epic folks 🙂 I came to UE4 from 2d/3d motion graphics and video production field. It’s being great so far, we upgraded our workflow pipeline and removed ‘‘rendering’’ steps from it 🙂 As I work with timelines and keyframes all day long, I...

I have assigned a technician to look into the first two issues you have mentioned. I do have some information about the other problems that you have pointed out:

There is no way to move the contents
of a matinee in local space (relative
to the matinee icon). All keyframes
seem to be made in world space.

This is correct, it is a limitation of how matinee works with UE4 currently.

This is a known issue. I have personally bugged this issue and assigned it to a developer before. It has unfortunately not been fixed yet.

Matinees are not able to be placed in
class blueprints. They only seem to be
placed in the Level Blueprint.

This is a limitation as Jacky said. I apologize for any inconvenience that has caused you.

We are currently working very hard on getting Sequencer ready for release. It will solve many of the issues that you describe here.

I just had a couple other question for the first 2 issues that you are having with Matinee. What version of the Editor are you currently running off of? Also, Can you provide any repro steps that I could follow on how set up the first 2 issues?

I have attempted the first issue and have been unsuccessful. I created a matinee and duplicated the matinee by Alt+Dragging. I then saved the level and reopened it an was able to work in the level just fine. If I am missing any steps, please let me know.

Wow thanks for the replies!

I reproduced these steps in v4.3.0 and it looks like the level is no longer corrupted. Instead, the second matinee ceases to function. I can see the second cube moving when I scrub through the matinee, but it will not move when I tell the matinee to play when the level loads (event begin play → play → matineeActor / matineeActor_2).

Looks like I am running out of reply space, so I’ll write up new repro steps for the other issue in a second post.

I have not had much time to test this issue, but it seems to be fixed in v4.3.0.

Again, thank you for all the help! UE4 is such a great engine and it is so refreshing to see it being pushed even further.

Thanks for the reproduction steps for this issue. When setting this up in 4.2, I saw and instant crash when loading the level after replicating the Matinee. I tested this in 4.3 and may have found a way to fix your issue. When you open the duplicated the matinee and add a new TemplateCube to the level, be sure to have the Cube as movable and not static. Also, when changing the actor in the level, have the actor selected in the view-port and select ‘Replace Group Actors with Selected Actors’. Also be sure that the matinee details has ‘Play on Level Load’ checked

Give this a shot and let me know if this helps. Have a great day!

Check the Details panel on the right when you select a mesh and you’ll see Static and Movable buttons under Transform tab.

Is there a way to specify a mesh’s movable mode? UE4 alerts me that the mesh has been changed to movable when I add it to the matinee, but I could not find that option int he mesh’s properties or a “replace with” function.

that seemed to do the trick! I wonder what the culprit was – the movable thing, or replace group actors? I’ll see if I can debug a little tonight.