What's My Best Bet For My Corridors And My Lighting..?

I’ve started work on a VR survival-horror game as a hobby and have only worked on models for my modular corridors so far. The game takes place on a ship in deep space and the ship has alien creatures that I’m planning on having randomly placed inside the corridors and corpses and to have them burst through air vents, engineering panels, light fittings and various corpses lying around.

Now I’m a complete n00b at this, I haven’t developed a game since the 80s with my 48K Speccy lol, and am just creating models for the first time.

So I started off creating a Corridor Template in SketchUp and am going to use this to create a Straight, Dead End, Turn, T-Junction and Crossroads and have various rooms scattered about.

One of the things that’s going to be happening during gameplay is that the warp drive is messed up and is sending out random pulses that kills everything electrical for a few seconds, including the protagonist’s headlamp on his spacesuit.

I’m planning on having lights here and there flickering too because these alien creatures are popping out of the light fittings every now and then.

After a good few different efforts I’ve now sorted out my first corridor, the Straight, pictured below (although I haven’t added the area above for the space for creatures in the light fittings yet): 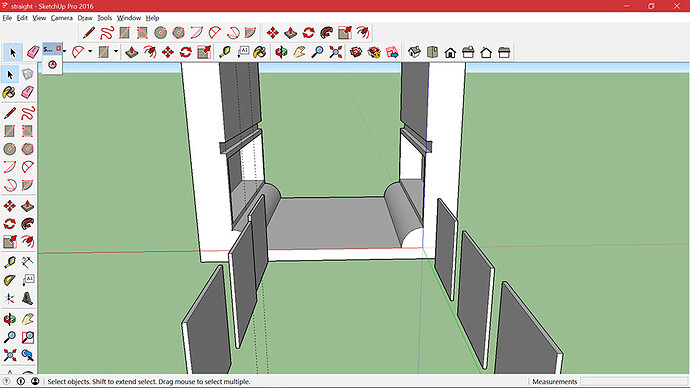 Now from this I’m planning on exporting an FBX file and using Maya to do the animations and UV unwrapping but if I have the panels in place covering up the inside of the wall would I get a performance drop because there are a load of polys behind the panels or will the Unreal Engine not have any problems because the inside of the corridor(s) is hidden…? Or will I be better off having just a few of these corridors with the panels and have a separate model for corridors without panels where aliens won’t appear…? I’m planning on having these aliens’ positions randomly generated each time you play.

Also will I be able to pre-bake the lighting (I’ve no idea how to do lighting yet but pre-baking is best for performance, right…?) and have the lights go off and on again without a problem as well as having the headlamp on the space suit doing the same thing…? I’ve absolutely no idea how any of this stuff works!

I was also wondering how complicated procedural generation is and whether there’s any tutorials available to do this using Blueprints because my c++ is VERY rusty, I haven’t done any programming for around 20 years! Having the ship interior procedurally generated will be great because it will give plenty of replay value.

Sorry for the long post and any stupid questions and thanks in advance for any help!

The polys will end up being transformed and then not rendered (because of backface culling.)
Ten to twenty years ago, this could be a problem, but modern graphics cards just won’t care – you’ll be fine!

Okay, brilliant! Thanks a lot. I was hoping that something like that would happen!