What is wrong with the source build and when it will be fixed!?

Two weeks I trying to build a simple empty project, but the engine just refuse. I builded 4.26 from the source in the GitHub, I tried maybe 7 or 8 times I tried to reinstall my visual studio 19. The engine is builded I can start the project, but when I try to build it I get only errors, empty build folder with a few files or even completed build that just can’t start because missing “global shader library” . Can somebody explain me how you upload source that does not work or tutorials in your documentation that are completely wrong? Why the visual studio always return successful build with ZERO errors and in the end I have uncompleted build or with missing files? Why I can’t start to work on my project and am forced to deal with this bugged piece of bugs? Why you don’t allow the normal version to build server?

It is not possible that you pick files from GitHub and they just can’t build. The possible issue is that you are not picking the correct files.

The correct procedure is to go to the repository (web) and from there you will see this portion here:

You will click next at the “tags” link and it will show the following page: 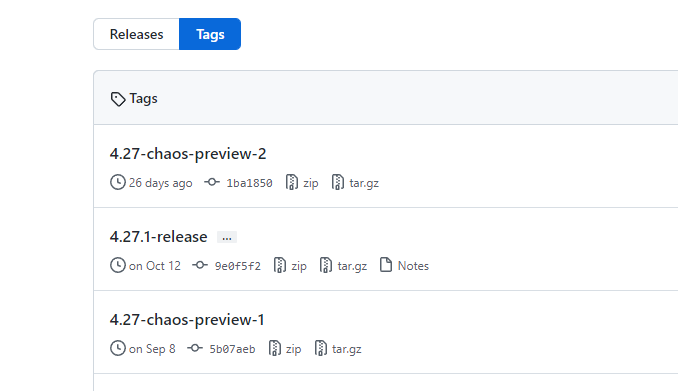 From here you will scroll down until you find the release you want and download it. Next is to follow the correct steps described at README.md. Providing you installed Visual Studio 2019 or 2017 and have the correct modules installed, you will surely succeed compiling.

So this is not correct repository?
https://github.com/EpicGames/UnrealEngine/tree/4.26
Maybe you missed the part where I follow all steps from the documentation and that I build the editor, but when I can’t build the empty project
edit: I also tried with 4.27.1 but with so many attempts I just couldnt more and tried with “stable” build with same result

The tag labels exactly the release at the launcher, using the files from that place is guaranteed. I don’t follow the docs specifically, but I use the common knowledge… could you please reply the link you are using with those instructions?

I don’t use github app, I just donwnload the source in .zip and then I:
-extract the content in folder
-start the Setup.bat
-start the GenerateProjectFiles.bat,
-start the UE4.sln
-I select the Development editor, Win64 target and from the menu Build>Build solution
This is how I install the editor, I have zero errors and I can start the engine successfully and work on the project.
Am I missing something to install any plugin, extension, library or whatever in the visual studio, or am I make something wrong till this point(installing the engine from github source)?
This is what is in the documentation there is zero information what is required to be installed in visual studio before this steps so maybe I missing something?

It might be something missing in VS install… let me check and I will post here shortly.

At the installer, if you select Modify, it will pop a window, there are 4 tabs: Workloads, Individual Components, Language packs and Installation locations.

At Workloads there is a section called Gaming, there you will need to select “Game development with C++” which is necessary for game dev with DirectX, Unreal or Cocos2d

If you haven’t selected that one, it is the only one from what I can tell.

I have this module installed

Then I can only assume you have to try one of the links under the Tags section I showed in the picture above. It is the web GitHub version, not the Windows app.

This has nothing to do with your building capability, you’re running the binary from the wrong path, probably.

I am running it from ProjectFolder>Binaries>Win64>ProjectName.exe
This is how I run my builds when I don’t use source build and my game is working fine

is the game working fine, or is it not working?

Packaged builds run from a different folder entirely than source.

"is the game working fine, or is it not working?

Packaged builds run from a different folder entirely than source.

I want to say where it is specifically, but I don’t have any packaged builds presently, and it takes me about 12 hours to make one given the size of my project.

It’s still not clear to me, even reading through this thread a 4th time, what exactly you are having a problem trying to do. I’m assuming, lacking correct information, that by “build successfully and start the project” that you mean a packaged build. But you also say “The engine is builded I can start the project, but when I try to build it I get only errors …”

So, let’s get clear on terminology:

“Build” for building from source, then you can run the editor with the project
“Package” for using the Packaging feature in the editor, which produces the final game output

confusingly, a “packaged build” would be the final game output from the Package step.

So, are you having problems with a build, or with a package?

What are the steps you follow, to get to the failure? And what is the output?

I already had the editor builded and working, I created a basic project for test
Now I trying to build my server and I am at step 2.10 from this documentation

How to set up and package a dedicated server for your project.

The problem is that now my folder Project\Binaries\Win64\ does not contain any .exe

There is my problem, my project is builded with 0 errors, but I don’t have any way to start the server or I don’t know where should be the server exe.

Ah, that helps us get somewhere. Can you post the output from the VS Build window?

Yes, this are the files, I created a new project with name “MyProject”.
DevelopmentEditorLog.txt (11.1 KB)
DevelopmentServerLog.txt (7.5 KB)

also, you can just build your Game project, you don’t need to build the entire solution.

Your configuration drop down in VS should look like this

select Development Server, make sure Win64 is selected in the dropdown next to that, then right click on your Game name project under Solution->Games select “Set As Start-Up Project” then hit Build.

for editor, do same but select Development Editor.

when it starts building your project, you’ll see

Thank you I successfully builded the project and now I know where my problems come from, for same reason the default settings of the project in vusual studio was with value invalid instead development and the checkbox for build was unchecked. 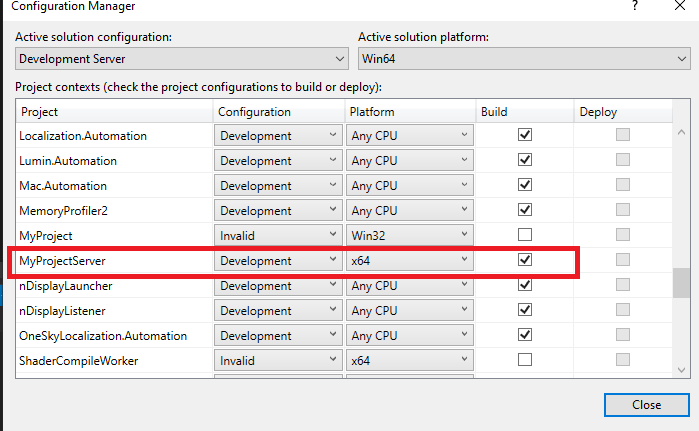 image699×431 23.1 KB
Now I can start my project with the .exe but now I must to solve the problem with the missing global shader library

I’m not presently doing anything involving multiplayer servers, so i might not be much help there, but I think you’ll need to run Package Project from the editor, and then make sure that all the files it generates are in f:\UnrealServer\MyProject

… something along those lines.