What do you guys use for project collaboration? My SVN server in Digital Ocean is having problems

I´ve been using SVN for a long time. I have a droplet in Digital Ocean it had been working well for the last years.

I few weeks back I decided to add more storage space and added a new 100gb disk. I hired a guy to set the server on Ubuntu and it seemed to be working fine for a week.
Then the problems started to happen. Lots of “checksum mistatch” errors that blocked me from committing and updating my repositories.

I hired another guy that fixed it but it only lasted for a week before the checksum problems returned. I am not sure where the problem could be. I can´t take much longer to fix it.

Here are the questions:

Should I just ditch SVN? Is GIT more reliable?

Should I try to fix the problem a little more or just look for an alternative?

How are you guys doing project collaboration? How much does it cost you?

How much would perforce cost for a team of 5? From what I read it is pretty expensive.

How does it work? Do I also need a server like the one I have in Digital Ocean?

Hi Fabito, I had problems trying to setup too with Digital Ocean, they kept on refusing to create an account due to ‘suspicious activity’ I’m pretty sure it was simply because I was attempting to setup an account from Scotland and not the United States, to be honest I found their demeanor a little off-putting so I started looking for an alternative. What I have instead is Perforce for the file management software, which is free so long as you have less than five people on your team, otherwise SVN Tortoise would be a viable alternative. For the servers I’ve been using Amazon Web Services for the last year or so. It’s costing me around $30 a month for a midsized Unreal project committing levels and new content around 3-4 times a week. There’s loads of tutorials on youtube for setting AWS up. I’m a designer not a programmer but didn’t have any trouble with it.

Thanks MCMaleod. I don´t think that you being from Scotland should be a problem. I never had any issue being from Peru (a lot more suspicious).

Tortoise SVN is what I´ve been using so far. But for the last month it brought me nothing but trouble.

From what I hear, Git is much more stable than SVN. And people tend to see SVN as something outdated. I just want to check is that is true based on other´s experiences.

Seems like Perforce is free for up to 5 people.

I will follow this tutorial and see how it goes: How to setup Source Control for Unreal Engine: Perforce Tutorial - YouTube

UE4 Multi-User Editing (Works great with or without Perforce.)

With Multi-User Editing, you can connect multiple instances of Unreal Editor together to work collaboratively in a shared editing session, building a single virtual world together with your teammates and colleagues in real time. 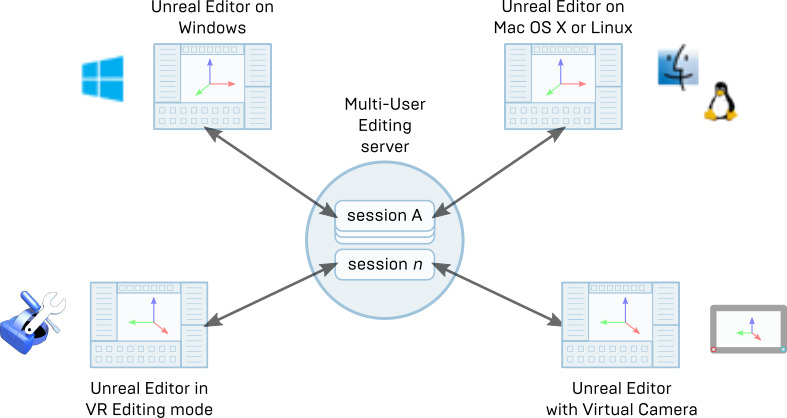 But it seems really hard to set up. My team is not on the same LAN and I don´t know much about setting up a VPN.

But anyway, I think it is worth doing some more research.

The issue with cloud hosting is all the low tiers have little storage space - which is a big problem for Unreal repos.

I found this site which does SVN hosting with 100GB storage for $2.99 a month:

I have been running a Perforce instance on a 5$ DigitalOcean droplet without any issues for a few years now. You can set it up in about half an hour depending on your experience with command-line Linux. See Installation.

As an experienced Git user I strongly recommend against it for use with Unreal. It deals with large files very poorly and while there is an experimental extension called Git LFS to solve this problem, it’s quite a hassle to set up and maintain compared to Perforce.

I feel like I should also point out that Multi User Editing, while a really cool feature, is not in any way or form a substitute for version control. It’s solving an entirely different problem, namely that of real-time collaboration in a remote environment.

Well based on experience neither GIT or SVN behaves as source control over Internet. Hear good things about Perforce and I believe it’s what Epic uses.

Based on use over Internet

We use Tortoise SVN for primary content development as due to the need for iteration, and for content needing to be visible to the project browser, separation from the coding team it’s much easier for teams to collaborate with out creating dependencies, high bandwidth traffic, or the need for locking source files.

The coders use GIT as it does have features that works best as to their needs and at give intervals content is consolidated to the core GIT.
Works well for our team as it keeps the traffic light as to doing code updates with out the annoyance of lengthy pulls and shader compiles

For project collaboration I am using Cloudways Team collaboration Platform, I have hosted my WordPress websites on their managed WordPress hosting platform and using DigitalOcean servers, In this scenario, you (the account owner) will be creating different Application Credentials for the different parties and applications that you want to give access to. You will need to send these credentials to your collaborators. You can check their platform by using 3 days free trial.