What can UE handle and how to prevent problems?

Hi!
Until now I’ve been working with much weaker engines, so maybe I just underestimate the UE4.

As a training with Blender and UE4, I’m trying to make this Soviet prefabricated building and I’m not sure what’s the best approach to make it.

As I said before, maybe I just underestimate the UE, since I’ve been working with much weaker engines, building like this (+ other features like windows, balconies, but no interior) should be no problem for UE4, right? 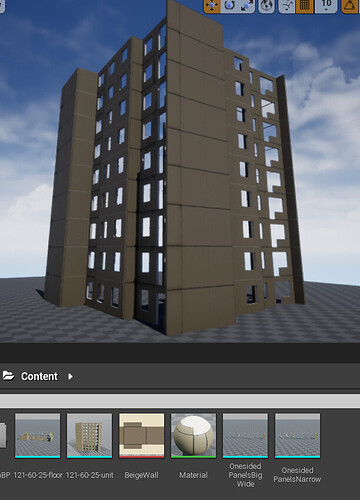 Edit:
I do it because of a future game set in a city, nothing static.

Well as a starting point there is nothing wrong with your current approach as the first step in the “process” is to first establish a working base as to where the rest of the environment can evolve from what you have in front of you. Can’t do much with a big empty and is part of what is called the “iteration” process. You start with a box, Gray boxing,and from there build it up until you have a completed building as you can see where you are at and what the next step will be as required by the project.

Think of it like wanting to go from point A to point B but don’t have any idea as to the number of stops necessary along the way.

As an example what you have is a completed facade that can support detailed deco parts as instanced but because the facade stands in as what the completed form should look like in place, and since most of the elements can be supported via instanced components, could be tuned to take advantage of the culling feature in UE4 where components that are not viable to the view port are not rendered.

There is nothing that says you should not be doing full facades, UE4 handles poly loads nicely with little performance impact, but the befit of components can be reused in other areas or buildings so the more you progress the faster things become.

Should you model the entire building in Blender?

Why not. Content development is a very visual process and if you can work straight ahead you can see what it should look like and then break it down into components then repeat the build process in UE4 using the completed building as the proxy.

Collision is another subject as it can be as simple as you need it to be or as complex as required by the desired game play. You can add simple collision if the math adds up as to the complexity of the object. Simple collision on an object this big though could be a waste though as best practice is to keep the collision low enough to just prevent the player from waling through a wall.

So yeah based on what you have presented you are underestimating UE4 as to whats more about workflows, iteration, and a lack of understanding the smallish features, like real time updates, that tends to get overlooked as it’s difficult to present the total concept with out writing a book as to what you would have to learn along the way.

There is just no right or wrong way of doing it but to figure it out through discovery and iteration.

Well as a starting point…

Thank you for your reply

According to what you said, I’ll stick with the separated panels. It should be better since the holeless panels can have simple collisions and they can be reused in different buildings.

I guess I simply must start trusting UE because the progress has advanced since 2004. (two months ago, bumpmapping was still the peak of graphical innovations for me