What am I doing wrong with the AI damage?

Hello everyone!
I need some help…
I try to make damage from the projectile I made onto the AI I’ve created but there is one problem a weird one…
I’ve done this for the enemy to take damage but each time it does the front of the skelet destroys immediatly in one hit the AI but the back of it deals the exact amount of damage.

I don’t understand why it’s one shot in front but normal in the back?! 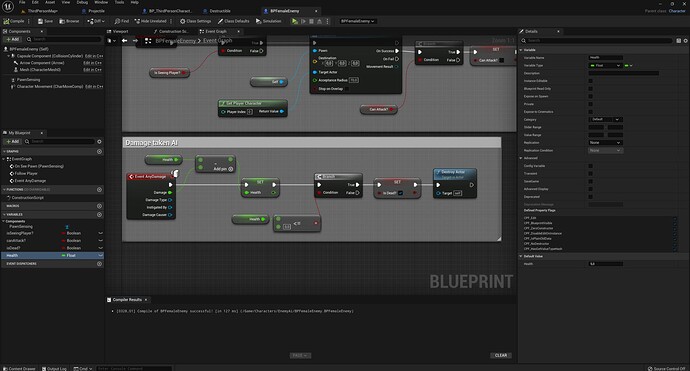 Hey @Veegvisir! Welcome to the forums!

Try running a PrintString node between EventAnyDamage and Set Health nodes, and then shoot in front and back again. Check to see if the event is going off more than once per shot. Chances are that’s the issue. IF IT IS the issue: you can have the projectile Get the HitActor on collision and ignore it for further collisions

Do I need to go to the projectile graph and create a new variable?

If you could post the code for the projectile, we can help figure out a fix

Just get us some screenshots of your projectile code and let’s see what we can do! It shouldn’t be a lot of work, just very specific work. 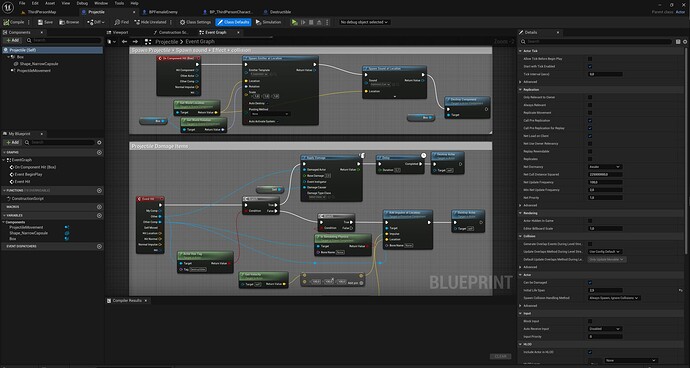 As an aside, you’ll want to Destroy Actor with “Self” as the target at some point or your world will be filled with invisible projectiles.

Yes the delay is for the sound cue with the moving/Characters if not the projectile just destroys itself without the sound and effect going off.

The Projectile have a destroy self actor when I do so the projectile disappears in the game and item labels.

Well let’s see… can we put all of the code on “event Hit” instead of separating them? That way you can have your sound go off before the damage goes out?