So I imported a house into unreal that I build in blender, but when I load the house into the level the walls closest to you disappear, like they do in Sims to give you the ability to look through walls at the inside. Does anyone know why?

maybe your normals are flipped, when you say you can see the inside do you mean like the pics in this thread?

Yes like the pictures in that thread. And What are “normals”?

basically normals are used by software to determine which way a poly or vert is facing on a model and how light is displayed on the model, you can see them in blender by turning the option on in the properties panel, eg: 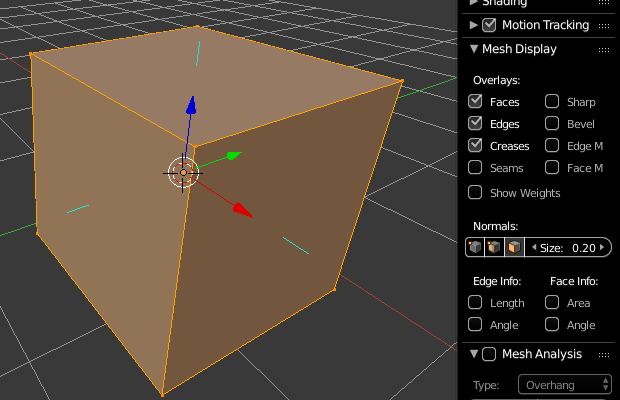 that image only shows the face normals(blue lines), UE4 only shows the poly’s facing the camera(unless the material is set to 2 sided but that’s for stuff like glass or whatever).

Yes like the pictures in that thread. And What are “normals”?

Smokeys right. Bascally there is no point to have an image on both sides of a polygon, becuase it would basically double the cost on your computer to produce the model, and seeing how most players of your game will never see that side of the model is basically useless and a waste of important resources. So what this means is that if your polygon is facing the wrong way… When you look at your game you will see nothing.

Forunatly, because this problem is so common, blender has a feature that allows you to flip the ‘normals’/‘polygons’ view.

This video will hopefully help a bit https://www.youtube.com/watch?v=p9Q5c-4AeRA

PS: There is a way to tell blender not to show the other side of the model(so it will be the same in blender and in unreal), saddly I have forgeten how todo this, and I am on Holiday.(this will help show you the problem as it will show a massive hole in your model)

Sorry smokey13, I’m using Blender 2.75 and I don’t see the Mesh Display (in the image) or the “Normal” controls.

EDIT: I found it, and thank you for helping

EDIT2: smokey13 I did what you said to do but it didn’t help the walls are still disappear. I also watched the video that Mfgcasa put-up, still doesn’t work

Thanks fighter5347 for the feedback, but I got it worked out. My walls were flat, so I made them 5cm thick and now it works (and just in case you want to know I have nothing in which to take a picture sorry