The VR kit contains 5 weapons, an inventory, an enemy character and 2 demo levels. Everything in the kit is has been optimised to support Oculus Quest and all weapons have plenty of variables that can be quickly modified (*sound/particle fx, damage/impact force, recoil, mag rounds, etc) * 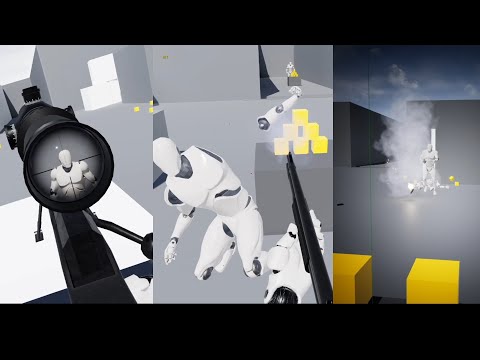 I’m unable to move the player or use the controllers while using the Oculus Quest 1 headset. I did everything that is in the troubleshooting documentation. Please, can you help me get this working?

Which map are you experiencing this with? Could you try pressing the build button for the level you’re on to build the navigation paths and also restart the Oculus Quest headset and go into settings to recalibrate the guardian/floor level. Also please check that tracking is enabled in the Oculus Quest device settings.

When you try to teleport does it show the small stub line indicating that teleportation failed or are the controllers not receiving any input at all?

I tried it on both the quickdemo and the fulldemo maps. I pressed the build and checked all of those settings on the device but it is still not working properly. I’m not receiving any input at all from the controllers. I am also getting the following errors when I load up the project…

Please can you check the Oculus VR Plugin is enabled?

Please can you test this on your Quest and tell me if you get the same result: VR_weapons

On a Mac you will have to use software like SideQuest to install the APK on your Quest. I assume at the moment you’re testing by launching the game to the Quest from within Unreal and are not experiencing any issues when using Epic’s VR template?

I installed the apk you sent using Sidequest but it’s just a black screen that doesn’t load up. Also, yes, I am testing by launching the game to the Quest from within Unreal, and am not experiencing any issues when using Epic’s VR template.

Okay. Please can you try selecting the Motion Controller Pawn in the level, go to the details panel, scroll down to Input and set Auto Receive Input to Player 0 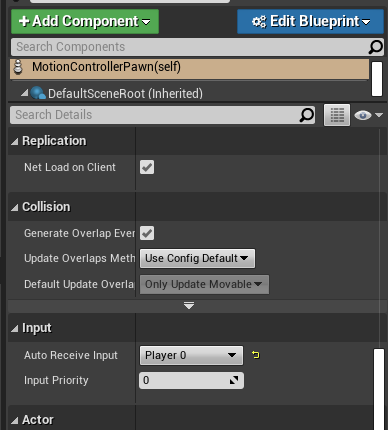 If this does not work please can you go to the Content Browser > Add New > Add Feature or Content Pack and add the Virtual Reality pack to the project. Then swap the motion controller pawn in the level for the VR template pawn and set it to Auto Possess player 0. If you can let me know whether this works it will help me determine whether it’s the Weapons Kit content or project settings causing the problem for you.

Okay when I tried the 1st step:
Selecting the Motion Controller Pawn in the level, go to the details panel, scroll down to Input and set Auto Receive Input to Player 0…
…Nothing changed

But When I tried the 2nd step:
Adding the Virtual Reality pack to the project and set auto possess player 0…
I was able to see and control the players hands. I could also teleport to another location. Also the height was adjusted properly.
I could also knock the yellow cubes with my hands.

But, I still cannot grip the guns, cartridge, or cubes with the grip buttons.

But, I still cannot grip the guns, cartridge, or cubes with the grip buttons.

This is expected as the VR template pawn will be using a different version of the PickUpActorInterface. What I wanted to test was whether it was the project settings or the project content causing the input issue. If the VR template pawn is receiving input and letting you move around then it sounds like it’s the VR weapons kit pawn or motion controllers that are causing the problem.

If you open up the MotionControllerPawn and BP_MotionController from the VR weapons kit, then hit Compile - are you receiving any errors inside these blueprints?

The BP_MotionController has has no errors after compilation.

The MotionControllerPawn has these errors after compiling… 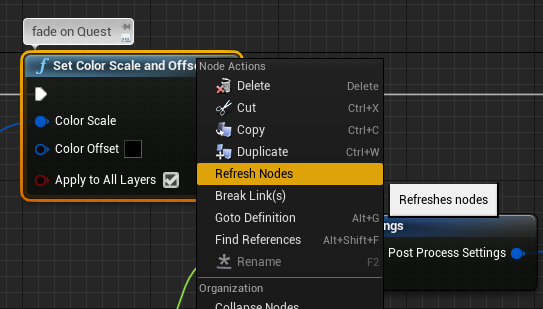 This should remove pins that no longer exist on that node.

Then recompile the blueprint and hopefully you should get no compiler errors, if this node is still causing errors just delete it temporarily, recompile then test on your Oculus again to see if the input is now working

Also, it doesn’t seem that the hand animation is updated properly as im seeing both versions of the hand at the same time when i grip and ungrip.

Hmmm okay. It sounds like there’s a bigger issue going on here. You shouldn’t be getting errors with the Set Color Scale Offset node if you have the OculusVR plugin enabled. I see in the first screenshot you posted you’re getting errors when trying to load the OculusFunctionLibrary, most of these problems seem to be caused by the OculusVR plugin - please can you right-click and search in the blueprint for the Oculus Library, let me know if you get any options like these: 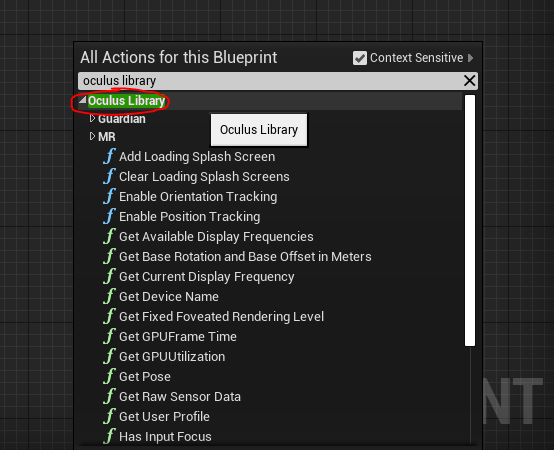 For the gun reloading issues - please can you try to compile BP_Sniper and BP_Handgun, these both have additional code added for reloading so there may be errors inside these blueprints preventing you from pulling back the bolt/slide

Also go to Pawn>Mannequin>Animations and open RightHand_AnimBP, compile it and check for errors as this blueprint handles switching the blendspace animations for the hand

When I right click on the blueprint I don’t get any options for the occulus library. 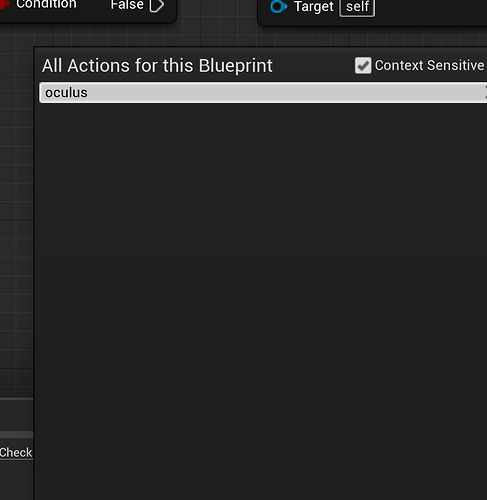 Although I do have the Oculus VR plugin enabled from the start. I even unchecked and checked it back again and restarted the editor. 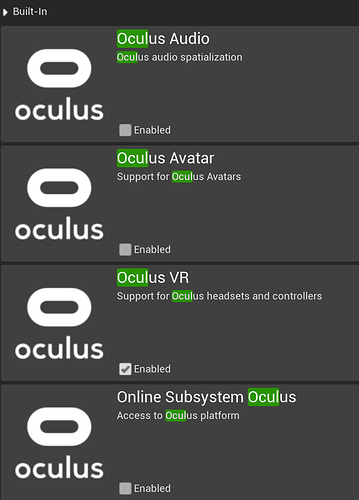 Also when i use the DEBUG handgun i see that it says ‘weapon pick up=false’ while i try to pull the slide while holding the gun.
Maybe the Oculus VR plugin is not really being installed somehow, even though it is enabled?