I am building a game for Steam VR using the HTC Vive. The environment is inside of a snow globe with a gingerbread house theme and the idea is to throw (and shoot) snowballs (made out of candy snow). At the moment I am going to start with a shooting gallery scenario where there are stationary and moving targets similar to a carnival experience. Once I get those mechanics sorted out I will then add in a survival mode where the gingerbread house is being assaulted (by grinches?) and you have to fend them off as long as you can. Once those mechanics have been implemented then I hope to add a multiplayer experience where players can throw snowballs at each other.
On a side note I have been playing with the idea of allowing the user to replace the “skybox” with their own 360 photo spheres. This could allow the user to turn the game into a christmas card of sorts which I imagine could be popular during the holidays. Anyone with a smartphone could create a 360 photo and drop it in there.
At this stage in terms of scripting I have created blueprints that all the player to teleport around the scene and blueprints for picking up and throwing snowballs and one for a physics based target. Plenty more work to do but I am hard at work all day every day right now during the summer break from my day job teaching.
I am also occasionally broadcasting my development process on twitch and then exporting the videos to my youtube channel where I have some of my 3D modeling tutorials.
Here are some screenshots and links to my twitch/youtube: (Keep in mind this is still a work in progress both visually and scripting-wise) 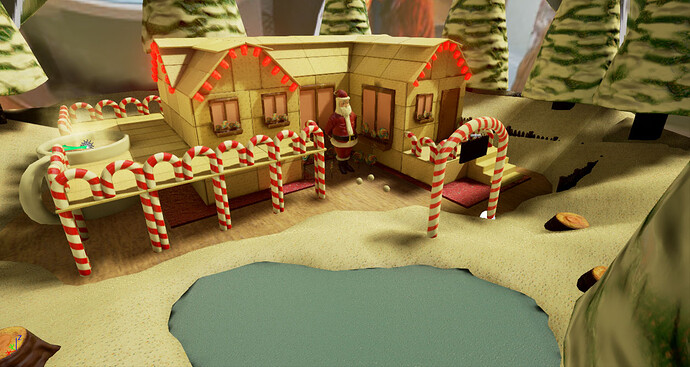 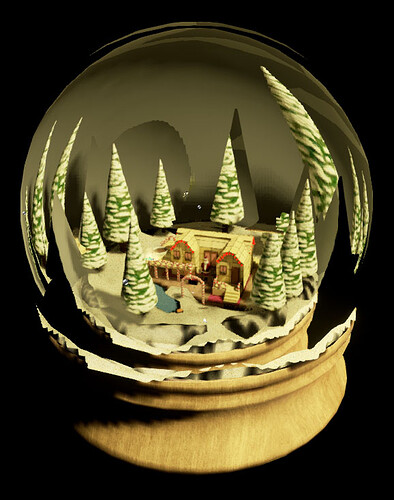 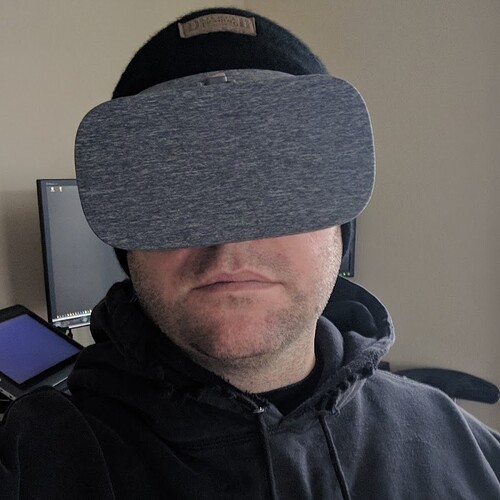 I use this channel as a way to provide help and encouragement to aspiring 3D artists. Hope you can learn something from my rambling and that you appreciate my sharing. I don't get paid for this I just do it to give back and be nice.

Having it inside a snowglobe is very creative. I really like the idea. It looks the part and the textures are smart. Have you been able to test it?
I’d really like to see the scale of a player in there to get a clearer idea of how big objects are. Can a person fit under that porch area? It’s hard to judge given the size of the door. How do the textures look from up close? (Considering it’s VR)

Having it inside a snowglobe is very creative. I really like the idea. It looks the part and the textures are smart. Have you been able to test it?
I’d really like to see the scale of a player in there to get a clearer idea of how big objects are. Can a person fit under that porch area? It’s hard to judge given the size of the door. How do the textures look from up close? (Considering it’s VR)

Thanks for the feedback.

I am testing it in VR as I go and I am attempting to make everything feel like real world scale. Fitting under the deck is possible though it may depend on how tall you are since the positional tracking of the vive adjusts according to the person’s height. I can always shift it pretty easily though. I have looked up photos of ski lodges for reference. I have been playing around with the VR editor in the 4.12 preview so adjusting scale can be done while in VR if necessary. I plan to stream some twitch later so you could see some of those textures and scale as I look at them in VR then. I still have plenty more assets to import and some more to make. I haven’t really committed to any of these textures yet either because I plan to use Substance Designer to optimize much of the textures but I can’t use it at the moment since I am running the preview build of UE4 which doesn’t yet support the plugin.

Really like the concept of this game. A snowball fight feels like it’ll suit VR! Plus I love the idea of setting it in a snowglobe and having a custom photo sphere.

It’s also great to hear you have thought about scope; breaking down your overall aim into smaller development stages is a great way to test mechanics as you go along, plus keep up motivation and make a project more manageable. Have you got an overall project deadline in mind?

Thanks for the encouragement!

Yeah I teach video game art and I have learned a lot about keeping students on track with scope and keeping them from over-committing to impossible projects. I have become obsessed with VR since last year’s GDC when I brought home a Google Cardboard and started making games for it with Unity. Now that Google announced their Daydream specs and that UE4 will support it I plan to jump off the Unity ship entirely and I plan to make this VR snowball fight game potentially playable for Steam VR and Daydream. I hope to have a prototype ready for Steam’s greenlight in the next month or so. I want at least some of the initial “shooting gallery” style mechanics in there and somewhat tuned for “fun physics” and I have some layout and art goals as well. The good news is that as a teacher in the college system I have a month off every 3 months and I am in the middle of a break right now so I am dedicated to this project 24/7 right now. I also have access to student minions to help me if I decide I want too open up to them and have them contribute assets.
The custom Photo sphere thing could definitely add some customization appeal I think but I will definitely have to do some research on how to make that happen. I am 85% certain it’s possible after some conversations with coworkers at the school who teach scripting.
Anyway thanks again and feel free to make suggestions or ask any other questions.

Make sure to have it ready for the Christmas season. You could make a good amount of money around that time.

VR should be selling like hot-cake too. Please let me know when it done!!!

Yeah that is part of what I am counting on.

Especially if I can get it functional on both Steam VR and the Google Daydream. I suspect the Daydream market will blow up pretty fast since everyone wants awesome new cell phones anyway and users don’t have to commit lots of money to get VR just for the sake of VR.