Why are we unable to view maps in the content browser? I don’t need thumbnails, I don’t need anything other than a list of the levels in the game, which can be dragged around the filesystem as needed, deleted, copied, etc…

Specifically the instance that prompted this question is trying to follow the particle effects tutorial on YouTube by exporting the map in the Content Examples project to a tutorial-specific project. I don’t want to clutter up my instances of the built-in content, I want to experiment in separate projects with just enough to follow along.

Have a look at this: 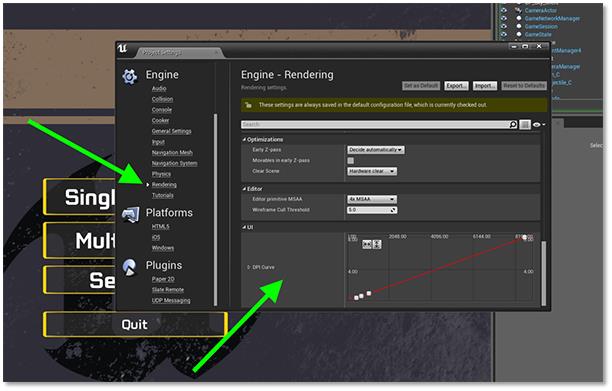 Engine News **New Features ** **Unreal Motion Graphics/Slate DPI Scaling ** Slate and UMG now have a built in mechanism for automatically scaling the UI for different resolutions in games. This new system will conflict with any existing system...

It is coming soon! If you download the master off github you can have it now!

Otherwise we will see this feature in 4.5 preview when it is ready.

That is good news, thanks!

I’m bootstrap-budget right now so I was planning on cancelling at the end of this session (~5 days) until I’m further along in development and/or really want a specific feature in an update. However I definitely plan to clone the git repository locally right before I run out of time.

The levels as assets change and the Slate scaling look mighty tempting though.