Hi community, I am having some problems with the vehicle physics, and I know that is something that I’m doing very wrong especially in Blender. I’m not an artist and actually I learned how to make a bone like a week ago.
So, please take that into account 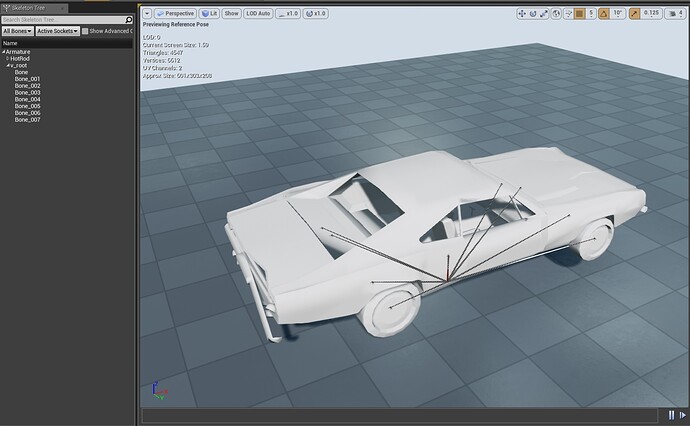 I am seeing some stranges bones here (orange), i dont actually understand why are thoose there. 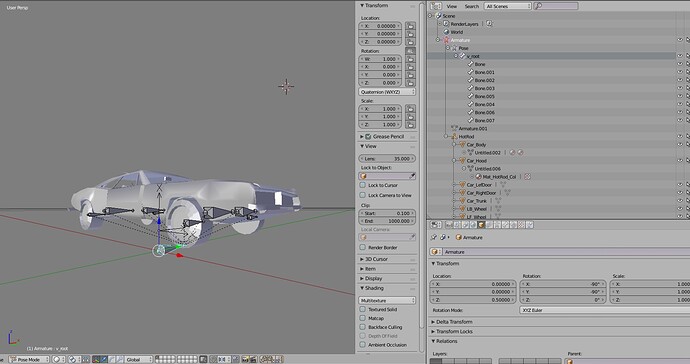 And a Video woth the problem:

I know this is a very common problem, and i saw a couple a threads about this. But I checked the common things like:

Ok, i was thinking that the bones under the orange square above are been taken as root or something like that. Probably the problem is in my blender project. When i get back home I will try to export the fbx again.
Any consideration is welcome, thanks.

ok if you want to use seperate meshes then don’t use the armature, its a case of one or the other but not both

Hi Geodav thanks for your comment, I, really don’t know what I want to use, I am just experimenting.
So, should I or not use separate meshes? What happen with the wheels? they should be separate meshes right? in order to rotate them on movement.
What do you recommend me if I need a car with suspension, similar to the advance vehicle template.

Hi Alex, for the moment i would suggest keeping it simple eg no armature just linked meshes
make sure the pivot for the parent mesh is at 0,0,0 and that x=forward z=up

i say this as it looks like we still have issues where the fbx export places the armature an extra bone at the parent as seen in your first picture, this would cause you a few problems with the physics

Hey Geodav thanks again, ok will try just keeping it simple. Wondering if I can create a simple suspension just with linked meshes… I will do my research.
And thanks for your vides too!

Well, after loot of pain and try and error, blender, modo, and learing basics things, i was able to get this working with out bones.
Now, I need to make a question.

What the differences with a rigged vehicle (and with a rigged AND weighted vehicle like the unreal examples).
I took a look at this: https://docs.unrealengine.com/latest/INT/Engine/Physics/Vehicles/DoubleWishboneVehicle/index.html

And as far as I saw, the standard vertical movement produced by the WheelHandler is just fine for my full body vehicles, however, what are the limitations that I could have on a future?

i think it really depends on how complex you want it to be, atm the ue4 wheeled vehicle code only supports 4 wheels so it you want to make a big 8 wheeler truck your going to have problems and would have to find other solutions

afaik though the code (physicX) includes variables for parts of the steering geometry (Ackermans princeple) i don’t know if it also has stuff for Castor+Camber / tow-in+toe-out, there’s a whole load of factors with vehicles and a whole load of maths
i could add that in most vehicles the suspention up damping if different to the down damping and you can also get spring with varied ratings depending on the distance they travel eg start soft then go harder the more they are compressed.

The problem here is your root bone is below the wheels. I’m not 100% sure, but definately in UE3 the engine would consider the location of the root bone compared to the wheels as the “chassis height” which was a bit bonkers.

I’ve set up several vehicles in UE4 from Blender, and it’s always a pile of trial and error so get used to it never working right away. Lots of weird stuff factors in to whether the engine will consider the vehicle bottomed out or not. But in almost every case you want the root bone near the center of the vehicle, with the wheel bones lower down on the Z axis. I believe the root bone location is also taken into account for center of mass.

Also, you don’t need or want physics bodies on the wheels. Usually you’re only going to want one physics body applied to the root bone, I imagine having wheel bodies is what’s causing your car to launch into orbit, as the physics system tries to make sense of the bodies clipping into each other at the start.

And i was saying, ok, I will play around with a little car prototype, just to make something fun and simple, “simple” -.-"
thanks to both for the comments, I was able to make the car work and play with the physics values. Pretty nice.

Now I am trying to import a new car… again a nightmare.
I followed the same process for the “working car”, here are the results:
(There is a kind of recording bug at the middle of the video, but I think is not big deal because you can see what I am trying to show)

And the blender project:

this is a screen when I imported the mesh:

The car that is working (i made some testing touches and the suspension and other things are a little ugly now on the video, but is working pretty well), have the same configuration that the one I am trying to import.

seems to be something related to the center/pivot point, but it is at (0 0 0) on blender project.
Some advice is welcome =)

ok, i found the problem, for this particular car mesh i need to adjust the offset for the wheels on the movement component for the vehicle, as you can see on the screen the wheels are all on the root and not on each wheel mesh. 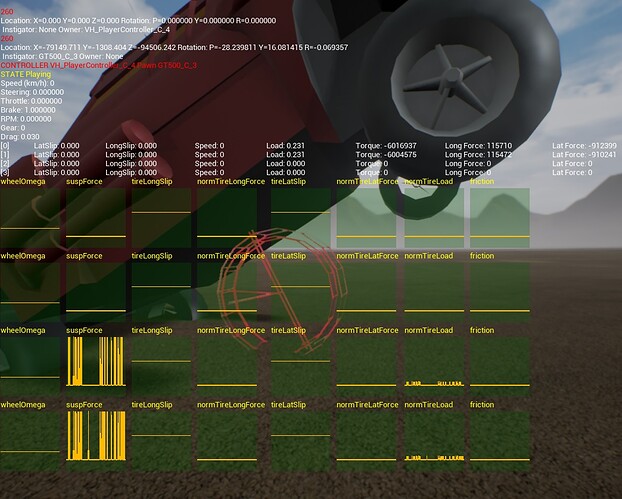 Why this didn’t happend to the first car?

What did you do to move things in the viewport while the game was running? thx

Hey, I am just “simulating”, check the list of option you have under the play button.