Hi, I have a problem with Max RPM vehicle movement, I cant set or get Max RPM in the blueprint. I want to upgrade the performance of our car while in a garage. Does anyone know a solution? 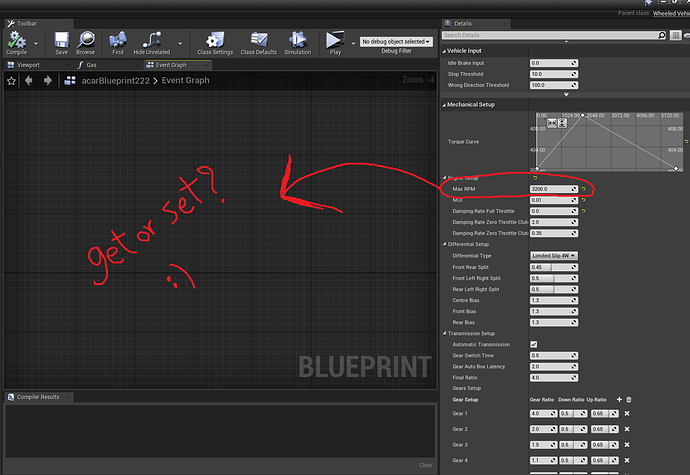 Not sure if something has changed but I found this:

Hi I would like to be able to adjust the RPM of a wheeled vehicle. I can do this in the side window (under details) but I want to be able to adjust during game play. I’ve searched for get/set rpm in the blueprint window but it doesn’t seem to exist. Is there a special way to locate RPM variable in blueprint scripting ?

You will note that this is part of a structure – the FVehicleEngineConfig struct, to be exact. So, you’d need to update the full struct, not just a single field.

This is done in the TVehicleSystem<FSimpleEngineConfig> baseclass in AccessSetup().
Unfortunately, that function isn’t exposed to blueprints, so you’ll have to build a blueprint function library that takes a FSimpleEngineSim and lets you call Setup() and AccessSetup() on it.

Amusing side note: The FSimpleWheeledVehicle actually stores each each kind of component in an array, so the vehicle can have more than one engine, aerodynamics, transmission, and so on. Except all the accessors assert that there’s only one.

thanks for your reply, Is there no other simple way to increase the speed of the car?

thanks for your reply, Is there no other simple way to increase the speed of the car?

Pre-make 10 different car configurations with different speeds, and choose a new car.
The player won’t notice, as well as the new car looks the same as the old

If that’s the only possible way, my problem is that I don’t know how to do it and there is not even a tutorial I want to do.

Your second solution causes many problems.

If you can’t write C++, and you can’t make the “upgrade” just switch between different pre-made car models, then I don’t know of another way to achieve what you want to achieve.