Vehicle Max Suspension Rise Issue/Bug.... along with other issues

Hey everyone, running into an issue with my vehicle project. So, I have the Suspension Max Raise (how high the wheel can go when the car falls to the ground) set really high (1000) so that my car/boat sort of bobs beneath the ground when it falls. This is what I want. Problem is, whenever I try and drive beneath a low hanging edge, my car spazzes out (by that I mean either it gets shunted under the ground, or gets sent off into the sunset). I tried lowering the Suspension Max Raise and that seems to fix it, but I really need it to stay at a high number. Ideally, I just want it to not look above the car for suitable places to put the tires (which is what I think is happening). This is my current and biggest problem. Anyone able to help me?

As for the other issues, I need help figuring out:

Here is a video of the issues as best show them. It would be great if someone at epic could throw me a bone and give me a hint of where to look, or at least tell me if this is a bug or working as intended?

Hey Knobbynobbes. It looks like a cool approach to make a boat vehicle.
From my experience with UE4 implementation of vehicle movement component, the suspension works by checking for collision from max suspension raise till suspension lower limit and adds the wheel radius to the collision point and moves the wheel object there. The wheel object itself is not physx based and doesn’t have any collision box. I made a video which shows the problem of how wheels behave currently - https://youtube.com/watch?v=Gj7sW38vYYY

About the whole boat project - I would suggest you try to ditch the vehicle movement component and try to apply forces to the physics object model with constraints of your own design, this way you would have much more control over how it behaves.

Hhhhhmmmmm, I have thought about doing my own vehicle type, even tried it by following the hover car tutorial here: 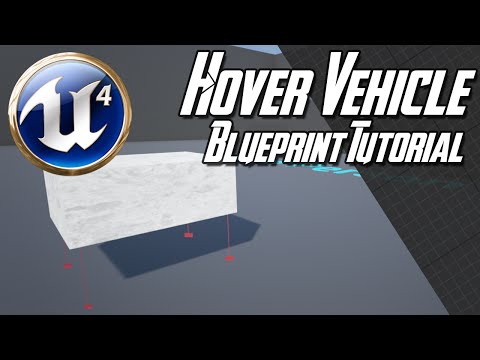 And I’ve seen the stuff from Space Dust Racing and their video giving a general idea of how they made their vehicles, but upon testing it, I always come back to the three (kinda 4 really) same issues that I don’t know how to implement that are absolutely necessary for this to work.

Now, I know that I am talking alot about the hovercar tutorial and that a lot of the issues stem from how it is different from a regular car, but that is because I just don’t have any other place to start from. I haven’t seen anyone else give even a hint of a tutorial on how to make their own car blueprint instead of just using Epic’s. As it is, I am pretty much stuck and all I can do is either get help from someone here or be the lucky monkey that types out Shakespeare by banging on the keyboard long enough.

And, of course, there is the issue that I seem to be completely inept at figuring out wtf is going on in blueprints unless I am following an exact tutorial. Just tried following/replicating what Pery77 showed on the Space Dust Racing blog here: Space Dust Racing (Unreal Engine 4) Arcade Vehicle Physics Tour - Space Dust Studios Which all looks great and like it would work. However, of course, in my own attempt to make it, I seem to put all the nodes and stuff together correctly (only so far as the hovering components) and guess what my biggest issue is… ding ding ding, if you guessed that my pawn won’t move, not for gravity, or addforce, or set physics linear velocity, or seemingly anything that has to do with physics. Oh, its accepting input, had to check that with a print string cuz there was no other way to tell. sigh Sorry for the short rant, just kinda wish things were easier to get going from the start, as some things just seem impossibly daunting in how mysterious they are to figure out what is wrong when everything seems to be in order.