i am trying to do sequence record of a vehicle with very simple configuration (rig: Body - 4 wheels) after the recording is finished the car moves in the correct direction with all body roll and so but the wheels are not rotating and front wheels are not turning (left/right) also suspension not working so wheels are going a bit through the floor.

i followed the sequencer Basics (UE4 - Sequencer Basics - YouTube) tutorial keeping attention for all details and also tried a new Project with the Vehicle advanced template and getting the same result.

I have same problem, can anyone help?

Have there been any updates to this problem yet? I have found the same issue.

Epic Games any fix for this im still getting the problem now with 4.22

I had the same problem and finally found a workaround to this: Record a Skeletal Mesh (linked to the VehicleBP character) instead of recording the actual Blueprint Vehicle. Here’s in detail the steps I followed.

Place the SM (Skeletal Mesh) of the same vehicle you’re using in the scene, then link it to the BP_Vehicle, Then set all the transforms of the linked SM to zero (Position and rotation to Zero). Now Both the BP and the SM should be exactly aligned. Select the linked SM and in the Details panel, remove everything concerning physics (Remove gravity, set physics to none, remove impusle on hit… etc). Basically make it just follow the movement of the BP but not interact with it or anything else. Finally, in the Sequence Recorder choose to record the linked SM.

Once the recording is done, open the sequence and play it. The SM follows the right trajectory, but the animation is still missing. Now find the “animation” in the level Sequencer, right-click, properties, and in the animation REPLACE THE DEFAULT the animation with the BluePrint animation that was also recorded. The names should be similar in the numbering, (like seq001-take03) so use the same number but the name should reflect the Blueprint one, the original character or vehicle.
And There you Go!

I too ran into the problem and found a simple solution: 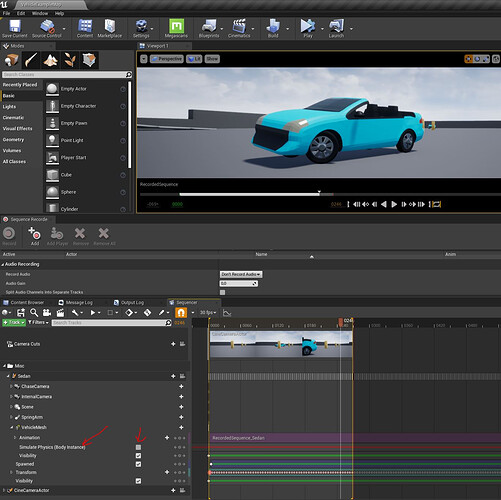 I too ran into the problem and found a simple solution:

OMG! Thank you HellDunkelkeit so much! This fix is not only to make your wheels rotate in the editor. But! More importantly, it makes your car moving while you are capturing the movie! Another way your car will stay still on the place only wheels will rotate under it. Brilliant hack. Epic must include this in docs! I lost 2 days trying to fix the standing car in the movie!

Going to revive this since it’s still only a work around.

Has anyone actually found a good way to do this??? Just spent months learning UE4 for a specific project where I need to record a vehicles animation and now discovering it doesn’t work as expected…

Thank God, for this Thread, i thought i was going crazy. This is still the only way to do this.

This is the correct solution.