VCam App Only works in 4.27, Please Add a Warning to Documentation!

Hi, was trying to get the VCam App to work in a 4.26 build last week and was increasingly frustrated as the app/iPad wouldn’t show up under “Message Bus Source” as documented here:

The problem is I googled “UE4 Virtual Camera” and arrived on the above landing page by following the first hit result. As you can see, the link in the SEO and the search result does not mention 4.27 anywhere.

Further, once in the documentation itself, there is no mention within the tutorial/docu that warns this is a 4.27 ONLY feature of Virtual Camera (using LiveLink to connect and pilot the camera using the AR Slam rotation control). The only mentions of 4.27 are in the URL itself and in the path at the top left corner, but they don’t mention explicity that it is a 4.27 ONLY feature. 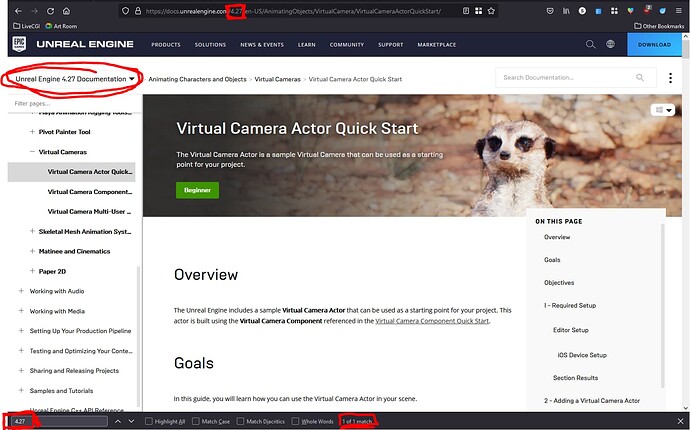 Note that in 4.26 I was able to get twinstick controls of my virutal camera through the app, but it was incredibly unreliable (and unstable) and I couldn’t establish a secure livelink connection up front. I assumed maybe I was doing something wrong until I decided to install a 4.27 project and surprise, the VCam App connected right away, just like the documentation said it would.

Please could someone throw a warning at the top of the documentation stating that the VCam App support only works in 4.27 builds for folks who arrive (like me!) at this page via a hyperlink from a search? I wasted almost three days of work last week trying to get this to work in 4.26

We strongly recommend always checking that the version of the docs you are looking at matches the version of Unreal Engine you are using. Many pages changed between 4.26 and 4.27, and we provided the version dropdown so that our readers could keep organized what features are available. Given the large number of pages that changed between versions, it’s not really feasible for us to put warnings at the top of every page that 4.27 is different from 4.26.

I have just switched to a new PC and started using VCAM as I couldn’t get Unremote2 to work any more. Bizarrely, I can only get VCAM to work in 4.26, it doesn’t even show up in livelink in 4.27. Have I missed something?