Variables on the GameInstance are not replicated

It seems variables on the GameInstance are not replicated. This even if they are set up exactly the same as a variable in the level blueprint, where it does work. I used the following steps to reproduce this: 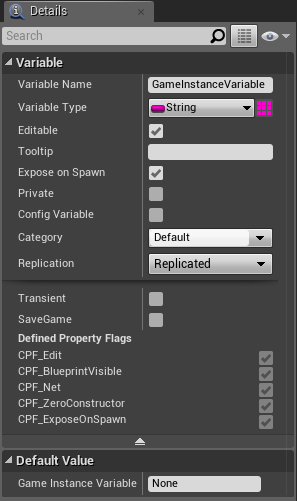 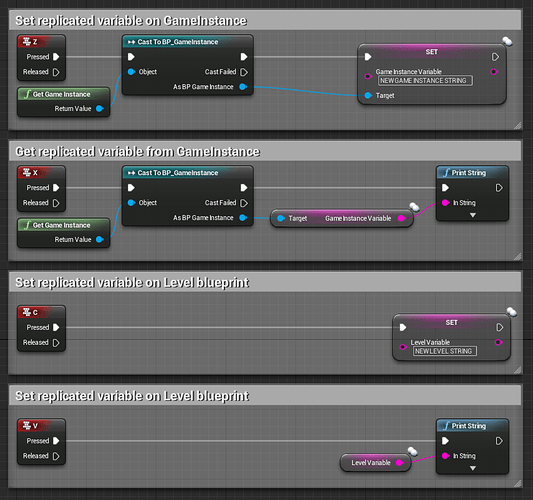 From the video Unreal Engine 4 Twitch Broadcast - Networking Framework, Tips & Tricks - Live from Epic HQ and the replication-logo in the blueprint I understood it should be possible to replicate also variables on the GameInstance.

Also, when I make a C++ project with a replicated variable, it requires me to implement GetLifetimeReplicatedProps. However, it seems this method is never invoked. I am using 4.7.4-2497108+++depot+UE4-Releases+4.7 on Windows.

I am completely new to Unreal Engine, so maybe I am making things more complex than they need to be

Sorry, yes, I was wrong about that; the GameInstance lives on both Server and Client, but it isn’t replicated.

I’m looking into ways you might be able to transfer PlayerState information between levels, and I’ll let you know what I find.

I’ve looked into it and spoken with the networking developers, and it sounds like there isn’t a clean way to do this in a content-only (no code) project. This is a feature that will require more engine work to support, and I’ll be entering a feature request to expose more functionality to Blueprints.

A hacky way to do it in a content-only project that might work is to have the server (only the server) save data to the GameInstance, then have the server copy it back out to replicated variables in the Player States post-travel.

Thanks Ben, this helps a lot!

Is there any update on the feature request? Having to first put all variables in GameInstance and then from there copy it to all the player states with a event at post is quite annoying, especially when you have lots of variables. Would be great if there would be something that travels with a level change and is also replicated. Furthermore you can’t do that event inside the gameinstance.

Here here. I’m finding it impossible to set up a network game using only blueprints. I know it’s partly my own incompetence but I’m frustrated I set variables to replicate from the game mode and they just don’t replicate down to clients and I still don’t know why. I keep hearing about the difference between game state and game mode and I just don’t understand any of this. All I want is to share some variables and change them and for them to be the same everywhere I don’t get why its so hard

Network games are complicated. Learning UE4’s implementation takes effort. I think I got a basic handle on it using C++ and some blueprints after many hours.

IMHO, using C++ for a networked, dedicated server is a requirement to have all the tools you need to address what you want to do.

GameMode object live ONLY on the server, never a client.

I have used these resources: 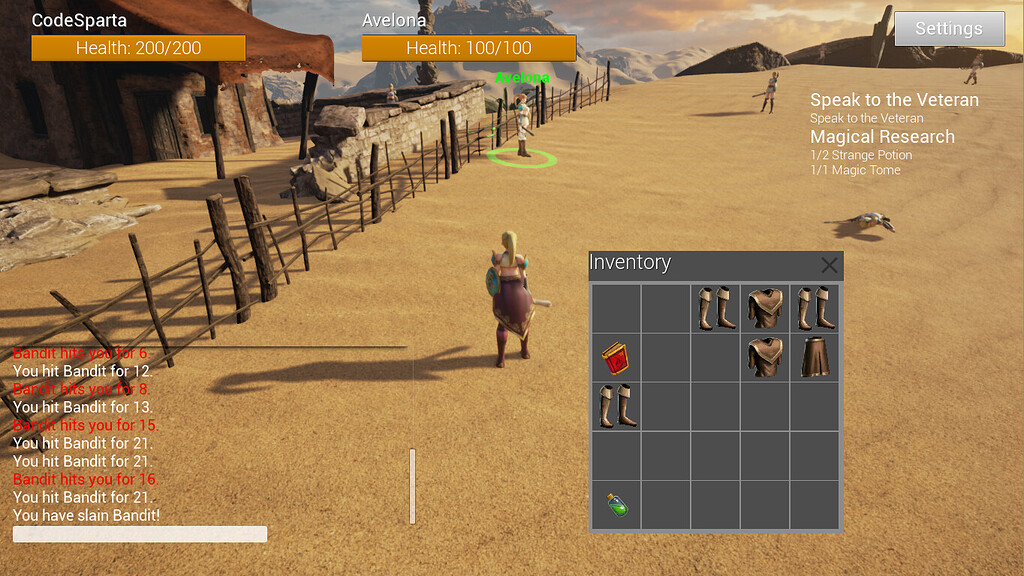 His PDF is a MUST read. http://cedric-neukirchen.net/

How can a client send a variable from his Game Instance to the listen server?

How can a client send a variable from his Game Instance to the listen server? So that everyone else can see it too? I have a string variable in the game instance called "Playername". The client sets it before he joins a session. Then he joins a...

Also, you could do a custom event off the GameInstance, make is server only (RPC) pass it the information you want. This is what I am going to work on here in a few minutes.