Variables not being set to widget ref?

couple things you can try, use a cast to node to cast it to your widget class and see if the fails pin does anything, or just plug the variable directly into a print string and see what its printing, or depending on your situation, just get rid of the isvalid node ive had problems with that before

Haven’t tried casting yet but when printing the variables to screen I noticed that their values are lost, but they are being set successfully when i first create them. I don’t think this is supposed to happen, I see the same thing is happening on the multiplayer shootout example I used for reference.

I’ve found a possible solution, at least it seams to work, in each widget I have an “Event construct” then I cast to the game instance (where the widgets are called) and set the appropriate variables to “self” and also a similar thing for widgets called from the player controller.

Never mind it’s not working. The problem seems to be the variables not keeping their values somehow.

Couple questions. 1. How do you know that they are being set correctly the first time? 2. Theres a same state pin for the conteoller reference that doesnt seem to go anywhere, whats up with that? 3. Are you sure that the variable is the correct type?

Also, it would definately help if you showed where the functions are being called. Since its printing not valid that means that the menu variable is null. Are you sure its being set before you do the switc node?

I don’t get this error at any time.

Now these are always called from widgets that are already created and their variables set to them like this function, the transition state macro is where the switch on enum node is located, so yes the menu variable is set to its widget before it is called.

Also, you showed the custom event you made (cant really read that last one kn my.phone), i need to see where that event is being called

The event “showPlayMenu” is called from other widgets, thats what I meant by widgets from other widgets, for example it is called from my settings menu’s back button or in a main menu level at event Begin Play then it goes to the transition state variable that removes the previous widget ie. the settings menu from the screen, then checks if the variable “PlayMenu” (widget reference) is valid if not creates and sets the variable to it and add to viewport, if it is just add it to viewport.

Here’s whats happening
-In the main menu, when play is clicked the play menu is created and the playMenu is set to it and it is returned by the string. 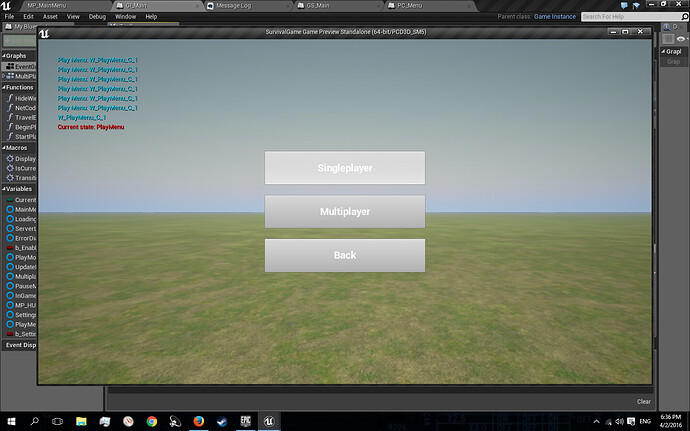 then singleplayer is clicked, a level is opened and an in game hud is created and added to viewport, then return the playMenu variable, but then it is null again? 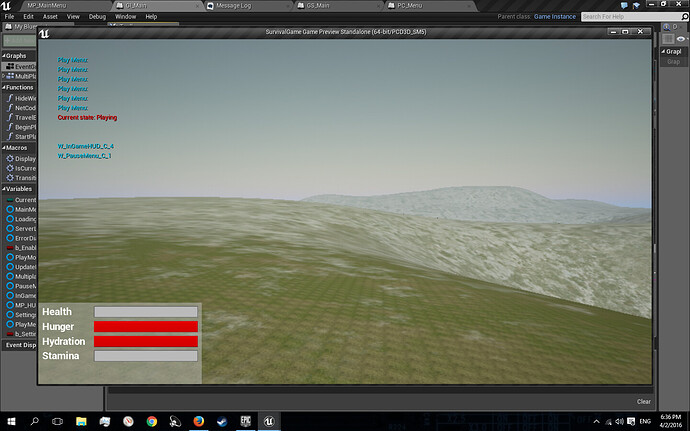 The level changing could be the problem then, ic you didnt already you need to save and load the variables that you need between levels. You do thay in the Gameinstance blueprint

Oh yeah that would solve my problem thanks.