I’ve been using the Unreal Engine a lot over the past week. I’ve recently hit a dilemma that I haven’t been able to solve through Google.

I created a function for MenuItem called SetText. This is where I’m having issues. On the MenuItem widget, there is a text widget which is assigned to the variable Title. Now all I wanted this function to do is to set the text of Title. However, when I run it, I get the error: “Accessed None trying to read property of *Title *from function: ‘SetText’”.

I call the *SetText *function on an instance of MenuItem in the Menu Blueprint. It manages to retrieve the input just fine, but it doesn’t seem to know what the value of *Title *is.

I’ll leave the Blueprint screenshot below to help out. 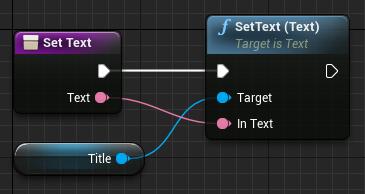 Thanks for your time,

Thank you for your assistance.

I had to understand how this worked a little more through Google. For anyone that needs to know the answer to this, this is what I did:

Once again, thanks a lot for your help.