Variable not setting when setting from UMG in 4.10.1

So, I am trying to set a variable inside a Widget BP with another Widget BP. I have my main menu with a boolean variable called Load. On my main menu I press a button which creates a new Widget. Inside this new widget, when I press a button, it is supposed to set Load to true, but it will not and I can’t figure out why… 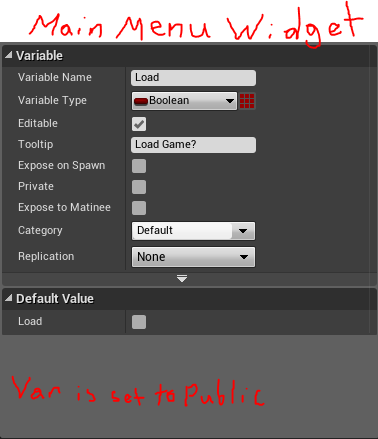 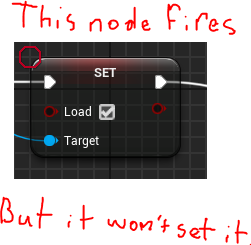 I’m having the exact same problem, and I’ve tried it with many different kinds of variables and variations I could think of. I first tried to make it dynamic but that didn’t work, then I tried to make it manual, but that didn’t work either. I was trying to make a hotbar that received a data structure, but it is different now because of this problem. Here’s how I have it:

Actually, I found a workaround to this problem. First, you have to make an actor named LevelDatabaseActor, then drag it into the level. It will store any variable you need, so put it in there, and set it to editable. Then, wherever you want to get/set one of its variables, do a GetAllActorsOfClass node with the class being LevelDatabaseActor, then drag off the return array and do a get node, with the index of 0, then do what you wish from that return value.

Thanks man, I will try this later! That is actually a very good idea, and Iv’e done something similar with saving data! Appreciate the help!