Variable not changing when referenced?

Where and how do you set your “ExampleQuest” variable and what Error do you get?

And how far does your exec signal go?

When I attempt to change a value of a variable using a reference to the blueprint, it doesn’t change. I have no idea why the variable refuses to change, because I did not set it anywhere else in the program. I really have no idea why this is happening. Thanks for any help you can give. 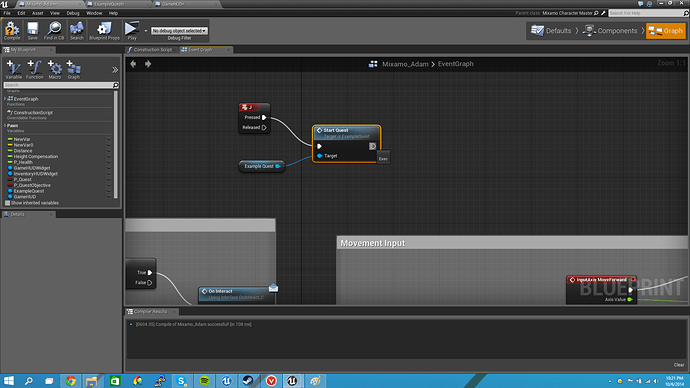 The ExampleQuest is a reference to the ExampleQuest blueprint. The issue is the variable H Quest Name and H Quest Objective are not changing when the function is called

So you checked that “Example Quest” is called, there are no blueprint errors and the variable does not change when you constantly call it?

From what I can see of your blueprints, where you have the set node for H Quest Name is hard coded to “test”. This means each time that the “Event Start Quest” is called it will change the name back to test. Hope this helps clarify things for you.

Hey Doug -
It’s supposed to set to test for test purposes in this case, but the variable doesn’t appear to be setting, at all

Should the Quest blueprint be of type actor? It’s currently set as an object, so it’s not placed in the world.

Yes the Quest blueprint should be of type actor. Depending on how your game is setup if you have NPC’s in game that give out the quest it may be easiest to include the quest logic from your current blueprint inside the NPC’s blueprint.