I’m attempting to make a material that I can combined different textures to that I can scale and position to mesh based objects as an instance material and I’m able to scale the material so it tiles but not able to figure out how to break out the position of the material.

Can someone give me a quick how to or point me to the relevant documentation? 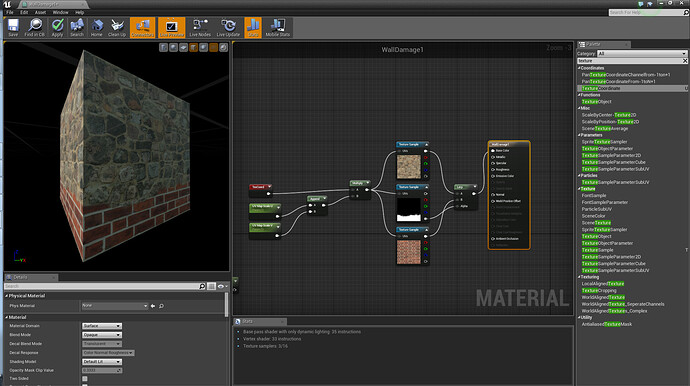 What exactly do you mean by “break out the position of the material.” ?

When I create an instance of this material I can change the scale of the U and the V of the material so I can scale the texture to match the object that it’s applied to. Works great but but the mat needs to be positioned, more so vertically, to align it with the surface.

P.S. really should be a stock material over ride to be able to scale and position an instance

have you seen the content example material section? i think theres an example about how to mix diferent textures and materials using layers.

Yes I have. Been over the samples and not looking to do the material in layers but just create a material that I can scale the tiling, which you can see by the BP I can do, but need to position the material up and down vertical and horizontal to correct the materials misalignment as in making the brick layer closer to the ground. Kind of like panning but with out the animated time factor.

After your multiply node add an “offset” value in X and Y for the texcoords in much the same way. Make it default to 0 so you get the default as-is and then in your instance you can offset the UV’s whichever way you like.

No, I mean make yourself a couple of variables (or a Vector2D if that’s available in materials?) and expose those public. Then simply add them to the results of the multiply node you have before using them as texture coordinates. So you can do it as two floats OffsetX and OffsetY, or as a 2D vector. Then just add them intro the results of the UV coordinate multiply (the one where you scale the UV’s). Use that as your final UV coord and you should be able to position the texture anywhere you want, or am I missing something in your question?

mat needs to be positioned, more so vertically

Shouldnt it be possible to pan the texture around in UV space by simply adding a 2D vector with components between 0 and 1.
So a value of 0.5 would shift the texture halfway…
You can do of course the same for the vertical…

Whats missing is I am clueless as to the ways of blueprints and and usually wing it but as you described it now works. Thanks

The big plan is we bought a boat load of textures and materials and want to be able to have an instance material, say brick bottom and plaster top, and use a mask to separate the two and then add a grunge map on top of it so getting the material to move around is just the starting point.

Unless of course there is already a material in stock that would do the job.

Gave your sample a go but no joy. Tried to plug it in a few different paths but does not budge and gives an error plugging in a 2 vector into a texture path.

What I’ve come up with so far 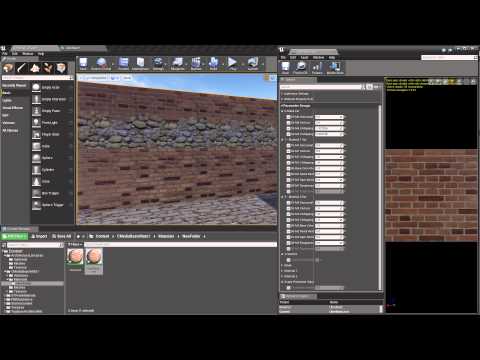 Shouldnt it be possible to pan the texture around in UV space by simply adding a 2D vector with components between 0 and 1.
So a value of 0.5 would shift the texture halfway…
You can do of course the same for the vertical…

You don’t need to break out the components. Just add (0.5,0) to the text coordinates.

FrankieV: Wow! Impressive. You are a champion! Does your Material blueprint look like spaghetti?

FrankieV: Wow! Impressive. You are a champion! Does your Material blueprint look like spaghetti?

Thanks and yea it’s getting there. (maybe this topic needs to be moved to work in progress?) 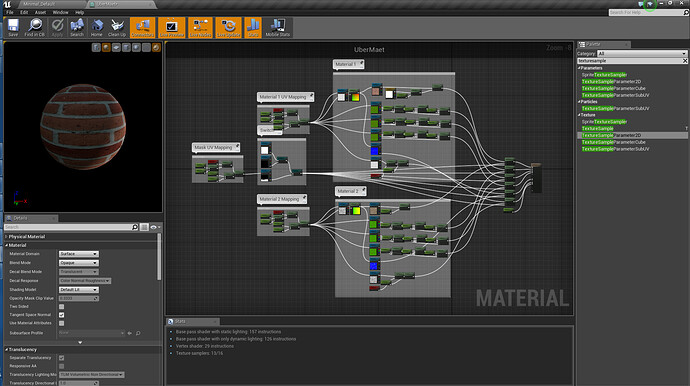 Wire in AO and opacity mapping.
Grunge mapper that adds a grunge to Mat1 and Mat2 as well as a global grunge to weather the entire material. (can finally make use of all those grunge maps at CG textures :D)
Tessellation control based on distance