I am new to Unreal and struggling with some of the concepts in respect to passing information between blueprints. What I currently want to tackle is a way to share blueprints and state machines that can be common between any number of characters. As my image depicts, the type of workflow I am wanting to achieve is to have (n) characters that all have different animation sets. They can also have thier own network logic but this would need to plug into a shared network at some point. One of the shared networks would be an Animation Blueprint which could deal with such things as IK setup but would also contain common state machine. The same states would exist for all character variations but the animation sets that are used would need to be switched as the character instance is switched. The skeletal mesh representation should also be capable of switching to give a visual update. There could be any amount of shared logic downstream from the point of switch plus divergent points where based on the switch value certain unique networks are utilized.
As a note I do not think that the Animation Sharing Plugin is what I need as it appears to deal with one animation set only.

Based on this description and the image provided is this possible to do in Unreal? Any pointers/links would be gratefully received.

Apologies if this has been asked previously. 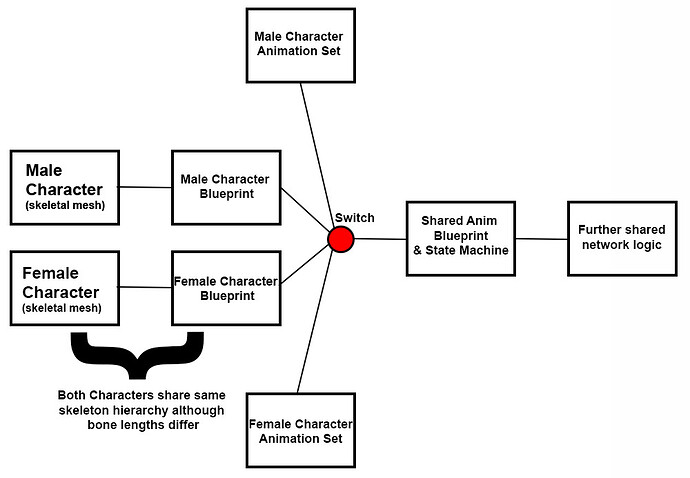 Sounds like what you want is Child Animation Blueprints. Create all your shared logic in the parent animBP then make a child of it for each different type you want. You can use overrides to change whatever if you need to make something specific for that character.

Only caveat is every character needs to use the same skeleton.

Thank you PlayingKarrde. I have got it working in exactly this way now. It does pretty much exactly what I want. It looks like Unreal doesn’t have a concept of Animation Sets so I cannot just swap a whole set in one go but instead manually supply an alternative animation one by one using the Child Animation Blueprint. It would be nice if there was a cleaner way but this will work for now. Thanks again.