I’m using the shooter game as a template, and created a camera attached to a springarm which is attached to the Hero TPP mesh. In the swing arm and camera details I select the use pawn control rotation. When I do this the third person view works almost correctly. The issue is the now when I move the mouse the camera moves as I want but the character, I think its the character’s world position also moves on the camera world axis.

What would be the best way to fix this?

The way this is worded makes it very hard to understand. I’m not able to picture what it is your character is doing?
Perhaps you could do a quick screen capture, upload it to a file sharing service (such as Google Drive), then share the video of the problem with us. That would make it much easier to troubleshoot.

In the mean time, these may help:

Check out the ‘Third Person’ video series on you tube. Also remember that there are 2 sets of rotation controls in a third person game, one for the camera and one for the character. If you don’t set them both you’ll have problems.

Also the shooter game is primarily C++, so you have to look at the code.

hello sorry was busy over the weekend.

Ok here is a screenshot of what I have in my player pawn blue print. I’m trying to attach the camera (camera 1) from my components to the set view target blend to the new view target, but it won’t let me attach. 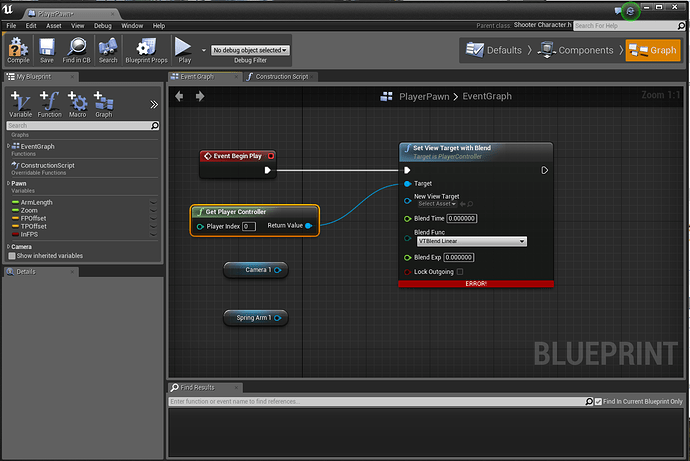 If I create a camera in the level, I can attach that though and it works like it should, the view port now renders from the in level camera.

When I look up or look down the character mesh also translates with the mouse movement, instead of just using the animation blends for the movement of the spine.
The shooter demo works perfectly other then the look up and look down. Actually the rotate probably doesn’t work either thinking about. just can’t really see the error yet.

So I want the mouse to move the camera but the character rotates x axis from the mouse going from the right to left or vice versa and uses animation blends for looking up and down with the mouse movements going forward and back.

Also I think the shooter demo can still be edited with blueprint don’t see why it can’t be.

Looking at it some more, I have to lock the the camera yaw and pitch to the character… I think.

The reason I point out that the shooter game is mostly C++ is because a lot of the functionality of the player character is coded there and not in Blueprint so if you copy it - it won’t work the same for you unless you copy the C++ code as well.