Is there a way of triggering Morph targets in sequencer?
I have some facial blend shapes that I would like to trigger when playing the shots in the sequencer, is there a good way to do this?
Could I potentially trigger a blend using Blueprints?
If not, can I bake my blends in Maya and then trigger them using an event in the sequencer?

atm I’m just setting my morph targets in a blueprint, and exposing a float to sequencer (“expose to cinematics”, I think).
It isn’t the most user friendly way to control morphs, since a basic implementation would have you exposing floats for each morphtarget, and updating each tick (and you can’t see them in sequencer, only PIE)

However, I already had a morphing system setup that controls multiple targets from a single float, etc. So it wasn’t as much a problem for me. It depends what you are going for.
I hope they add a simple “morph target track” to sequencer though, it’d be so much more straightforward.
Vote here: https://issues.unrealengine.com/issue/UE-36126

If you don’t need actual control over the morph in the sequencer track, and just want a predefined morph sequence to fire, this might be of interest (using the event track)
https://answers.unrealengine.com/questions/442903/using-morph-target-in-sequencer-with-blueprint-eve.html

Hi. I also hope they add a simple “morph target track” to sequencer though. Any updates to 4.24 version about this issue with morphs target in the sequencer? Kristiano, it will be very great if you record the tutorials about this. Because with my knowledge for this moment not enough to understand all you wrote

I managed to apply morph targets in the sequencer as animation blends (drag drop in the timeline sort of thing).

I created a dedicated morph target animation in my 3D program (say, morph blinking at 100% keyed for one frame at the first frame with no other animation) and when I import that I make sure the morph target animation uses ‘Local Space’ in the characters Animation>Asset Details>Additive Settings>Additive Anim Type pulldown (otherwise the bone animation will also be applied in sequencer, even if it’s the T/A pose). After this (if I recall), I could drag this animation into the sequencer on a different track, or even the same track as other bone animations, with full access to transition etc.

Update : If Local Space doesn’t work, try Mesh Space. I have found that this works and I can combine skeleton animation and Blend shapes (even multiple if needed).

It’s not ideal And there are some limitations, I would also like access to morph targets track in sequencer, but we do what we can

Thanks for fast reply! It will be a nice to see a tutorial about this method!

By the way I am not totally sure about the question, but if the intention is to trigger the shapes separately, I am not sure. But if you import the Blend Shapes with the animation during import (click that checkbox) they will automatically play with the animation. So just using Blend shapes with animation (which is what you would usually be doing with cinematics) is very straight forward.

After using ControlRig the other animation is disabled… any ideas why?

Hello there, how exactly do you do that with the control rig plugin ?

To explain further- you create a new control in Control Rig, set the X translate minimum and maximum to the range of your morph (usually 0-1), then plug in the X translation of the control into a set curve value node that has the name of the morph you want to adjust in Sequencer: 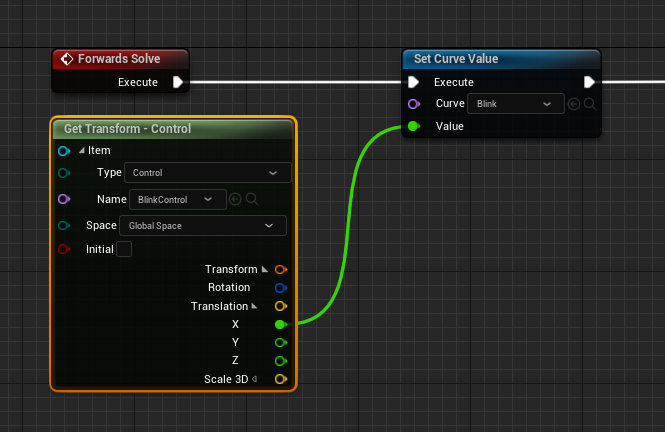