I started a new project: 3rd person for Mobile, maximum quality with no starter content.
I clicked ‘Add to project’ on the Maximo character pack (the free one with 15 characters) and added it to my project, the folder appeared in the content browser.

I can change the ‘Mesh’ to the character I want, in my case the ‘Vampire’, and he appears in my example game in his default T pose. I change the ‘Animation’ settings to MaximoAnimBP_Vampire,
set to ‘Use animation blueprint’, and the character goes into his default Idle state. When I test run my game, I can use the touch pads to walk around normally, in his regular run animation, the camera movements and
everything else works fine. However, when I hit space to jump, he jumps up physically but his animation remains in ‘Run’ mode. He takes a few running steps as he goes up, slows down the animation, then takes a few
running steps as he falls down, and then back to his default Idle state. Nothing else happens other than the regular run animation when I move around.

I particularly need the Running Jump animation, I don’t need any attacks or anything of that sort.
I know I’m doing something wrong here. I tried following the UE4 tutorial on how to use the Maximo characters, but I’m having some problems as I think it was intended for an older version of UE4.

Any help would be appreciated, Thanks for your time!

So I’ve tried something here but I’m still super new to EU4, it may be a nooby attempt.
I have a ‘runner’ type game where the player can’t slow down or speed up, but is always running.
They can jump by pressing the screen to jump, but as my initial post described, I would not get the jumping animation.

I feel like there’s got to be an easier, more efficient way to achieve this … 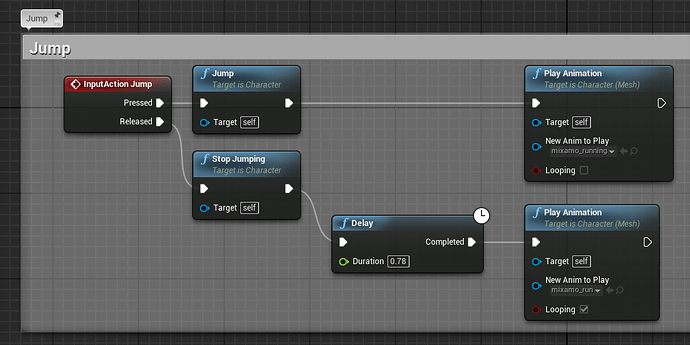 As far as I know, all of the Mixamo characters come with proper jump/running jump animations. Did you edit the blend space/animation blueprint at all? It’s supposed to have the transitions in there already.