Using just one mesh for an FPS character

Hi,
I’m planning to make a simple and small FPS-something. And from what I read, it’s a common practice to use separate meshes for the third and first person views. But is it ok to use just one mesh? I’m a beginner, and using just one mesh would simplify a lot of things, like shadows, legs that a player can see, and more. On the other hand, I don’t really know if it’s easier and maybe safer to use two separate meshes in the long term. I would be very grateful for help.

Personally i would go for single mesh as well.
For example am using a third person view and if am using a bow to aim, i wanna switch it to first person view, this will make my camera come closer to my char arm/chest.

The reason for using separate meshes i guess is performance, since at that close the texture need to be details and is only showing it arm+leg part while removing other parts.
But you could make it such as texture quality of some parts get reduced while arm texture is increased when you wanna switch to first person.
You could do your own ways and make some profiling on performance if it worth it.

Note not to be confuse with some old tuto on youtube where people separate the body part and leg part to make it dynamic. We now use blendspace to blend animation for 1 single mesh so no need to separate meshes.

You can use a true first person 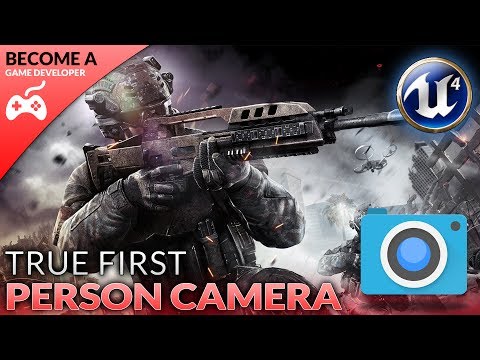 It’s kind of amazing how the virtuos guys has never acrually learned anything XD
You picked the worse possible tutorial.

The reason you pick different or separated meshes are vast.

First and most importnatly TFPS needs AAA quality animations.
If you don’t have the animations do not patch stuff together thinking “It’ll be good enough”.
It won’t. You’ll literally make people and perhaps yourself puke during gameplay.

Second, interpeneration of the camera.
You are very likely to clip the character mesh and render the inside of it visible in some poses.
Swapping to a mesh that just doesn’t have that geometry (chest/neck) area prevents this entirely.
Otherwise you are limited to what you can do when it comes to everything else:
Physical animation, ragdoll, etc.

Third, dedicated animations.
You can actually use entierly different animations depending on the view. Which some games do (even with true first person).
Think about it like Hollywood.
Whenever the camera is out (3rd person) the main character acts like a boffoon - just like Hollywood actors. Turning a reloading animation into a national security event.
When you are in first person, the camera is right there.
If you act like a Hollywood actor, chances are your hands are out of frame. So you need softer and possibly much more realistic animations.

Now, an OK compromise is to cut off and hide the head. You can find some of that here, but its not meant to be a “True first person camera”.

It’s meant to teach you how to play with cameras in engine so you can do your own stuff.

You picked the worse possible tutorial.