Hey guys, I’ve been kicking around ideas for how I could procedurally animate a set of legs for a spider mech, and I was curious if this kind of approach would work?

To start, this is the kind of effect I’m shooting for: 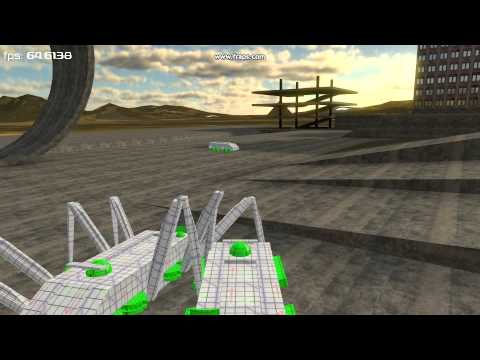 The idea is basically that all the ‘real’ gameplay animation happens to the mech’s body root while the legs are animated procedurally in Blueprint (and are purely a visual effect with no real bearing on gameplay). The ant GIF example above comes from a guy who set up the character in Blender and mentioned an idea that sounded viable.

I’m still wrapping my head around Unreal’s IK system, which is why I wanted to see in advance if anyone more experienced could tell me if this is at all feasible, if there may be a better way to go about this, or provide any tips.

Also, just to clarify, I created a mock-up animation in 3DSMax to illustrate my current line of thinking. In the GIF below, the Rest Target is green (anchored to the body) and the Current Position Target (anchored to the world until the distance limit is reached) is blue.

Have a look at this thread:

EDIT: I have discovered that the built in crouch function changes the height of the players capsule, so the method I used of getting the capsule half height on construction of the actor will not work right when crouched, to fix this simply get the...

Thanks for the link, I ended up using a few parts of his set up in my current version. One thing I’m attempting to do, however, is animate the IK Effector procedurally, and have that be the only animation on the legs (basically so everything is procedural).

I have the basis of this system working now, but I’m stuck on how to interpolate the vectors for the foot positions. Here’s a link to the AnswerHub question I posted (along with my current progress).

I responded to your AnswerHub thread.