Use of stereoscopic 360 degrees videos in UE4

I just got a 3D (stereoscopic) 360 degrees camera and I was curious how you would approach importing and using this kind of data into Unreal Engine applications. My best idea so far is to be using 2D 360 degrees videos as materials on a sphere, but I have no clue yet as to how to go about using 3D data.

Any comments on using a video texture for a skybox (for 2D videos)?

Thank you for the reply.
I just got the Vuze. It seems like an incredible camera so far. It’s the only one I could find (within a decent budget) that would record 3D video, not just 360. Besides, it has some sort of 3D audio separation that I didn’t get to look into just yet.
Here’s a video sample: - YouTube

Actually, that clip was rendered out for YouTube. The original footage looks more like the one on the left monitor and it also comes with the spreadsheet on the middle screen.

Here’s a 3D material I found in a forum: 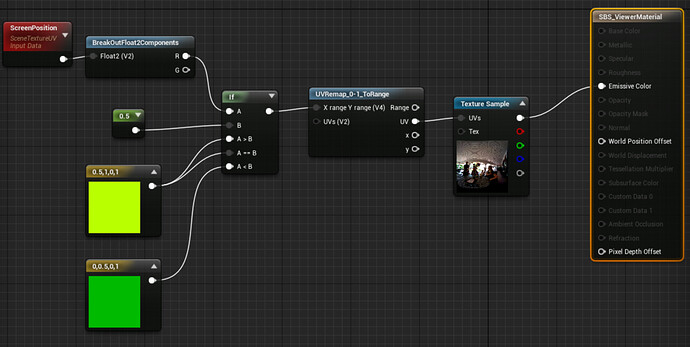 Sorry I can’t find the source for giving the real credit however this works great using as a material on your sphere! Which 3D 360 cam are you using out of interest?

Another difference I noticed from your example video is it’s top bottom 3D? The material I provided is for Side-by-side 3D. You would need to adjust the co-ordinates of those bottom left inputs to get it working with top bottom correctly.

@aussieburger did that material work for u for 180 lucid? I am messing with one

You could look into creating your own sphere in a modelling programme (like Blender which is free) and then import that into Unreal. I don’t have much experience with Unreal Material blueprints so found it a bit easier to learn about Blender than material bp’s. I then followed the normal process of playing back a video using the Media Player and all I needed to do in Unreal was adjust the texture coordinate to match the video

I am trying to play a stereo 360 video (512x512), and i follow this steps; i create a sphere mesh with inverted normals and i made the material for the video, but it doesn’t work… instead with the mono video works.
In the materia that i create for the 360 stereo video (following the material posted in this topic) i cannot see the preview in the texture sample…
Someone can help me?

I’m trying to do the same thing but with stills
I have thousands of 360 stereo images I have made that I want as the far environment
I’ve been using a flipped panospher with non stereo 360 equirectangular images, but I would like the far environment to be stereo for vr.