Use more than 1 Action Input at a time

You can press only one at a time. If you are sprinting and press the jump button the jump input will not fire because the sprint is held down. This is also true for any other action mapping

That’s not right.They all work simultaneously with no issues. Maybe there’s something wrong with your movement setup?

This is not true. This will fire all day long: 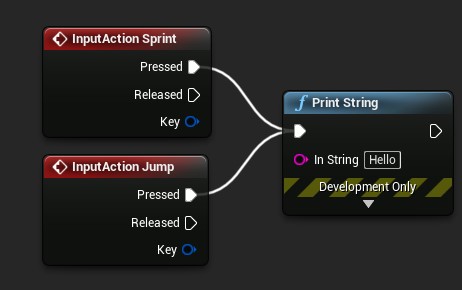 Can you provide an example where it does not work?

I want to be able to sprint and hit the jump button while the sprint button is pressed to jump while sprinting. It appears UE4 only allows 1 action mapping at a time. How would I go about this?
Thanks in Advance!

It appears UE4 only allows 1 action
mapping at a time.

What do you mean? You can have as many as you want.

Input consumption is a thing. If you use a Space in one place, it will not work in another blueprint. Input is also handled in a very specific order. Whether it is consumed or not can be overriden.

I found if I replace the keybinding of the space bar for jump with Q key instead it will work. Odd.

I found a way to make it work. If I replace he keybinding for jump, which is space bar by default, to “Q” key then it works. This is basically all default First Person code with the addition to the sprint and crouch. If I change it back to space bar then it quits working again, Space bar is not linked up to anything else. I’ll post pics tonight of my code since I am not on that computer right now.

I searched around and the space bar was not linked to anything else that I could see thru blueprints. I ended up making a new player controller to replace the default one and now it all works fine. There must have been something consuming the input. I had this problem way back on 4.2 when I started on UE4 but never tried going any further since the games I made did not require it.