(URGENT) 2 cameras attached to player. How to add post-process material to only one? Blueprints

I used a third person template and hit edit TirdPersonCharacter and added second camera to it like this: 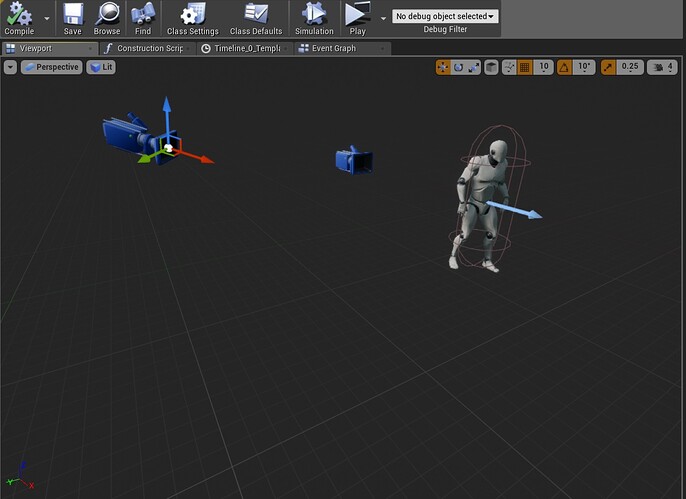 Then I followed a tutorial and set up this node tree that allows me to switch between cameras by pressing a key (F): 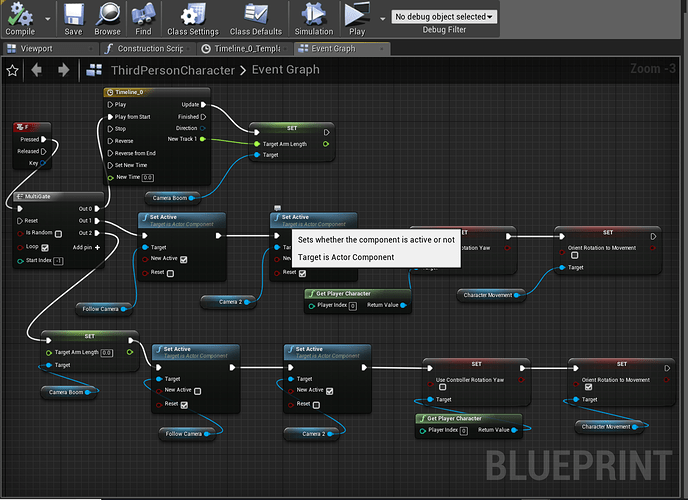 P. s I am total beginner in this so I would realy appreciate if you could tel me what to do in detail ( I have no basic knowledge yet)
P.s.s I have deadline soon please help.

Can’t provide screenshots now; look into post-process settings node in a blueprint; it’s virtually the same as setting it in the details panel.

I could realy use some screenshots or just tell me where to plug in that component and how to give that component the material I need. I have no idea how to connect them together…

Create a node called Make PostProcess Settings. Click on it and find Post Process Materials in the Details tab. Tick the box to expose the pin on the node. Drag off the pin and promote it to a variable. In the variable (after compiling) add an array element and choose Assert Reference; select your material there.

The Settings with the variable connected will add the material; if the pin is unconnected, no material will be used.

I have made my own post process material. I can’t find it in details tab

How do you apply that material to the Post Process component then? If you select a material in Post Process details it’s the same thing.

All the materials in your project have to be there to pick from. 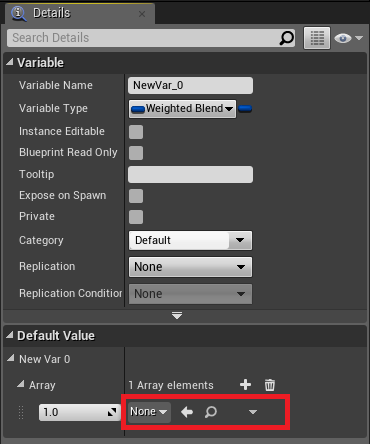 Ok, now I exposed the pins. But I can’t seem to find other nodes when I try to add them. Mat and Post process nodes aren’t in the list and thera are loads of SET nodes and I don’t know witch to chose…
I tried dragging my material and instance in the node tree but I can’t. 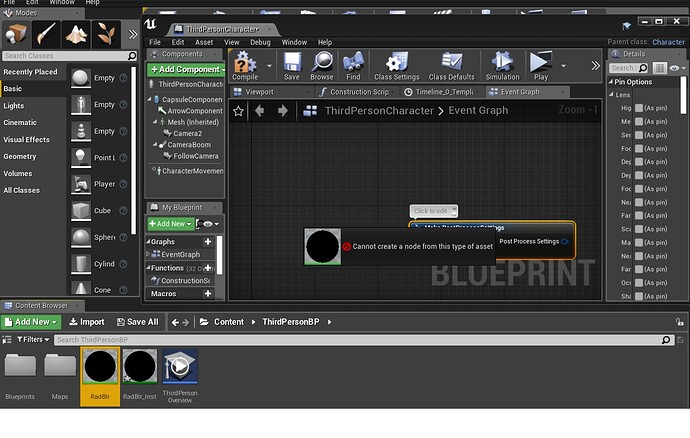 Mat is just a variable that you have to create. That the part “Drag off the [Post Process Materials] pin [from the Make Post Process Settings node] and promote it to a variable”. And Post Process is the Character Component that you lack for some reason.

Sorry, just from the way you described everything in the beginning it seemed to me that you’ve already figured out the post process part, and just wanted to know if it’s possible to apply it to only one camera.

Okay I figured out how to add Post process and variable node. Do I have to do something with the variable or leave it as it is default? Also I don’t know witch set node to add because there are plenty to chose from. Also where in my node tree do I plug in yours for it to work or will it work without plugging in? 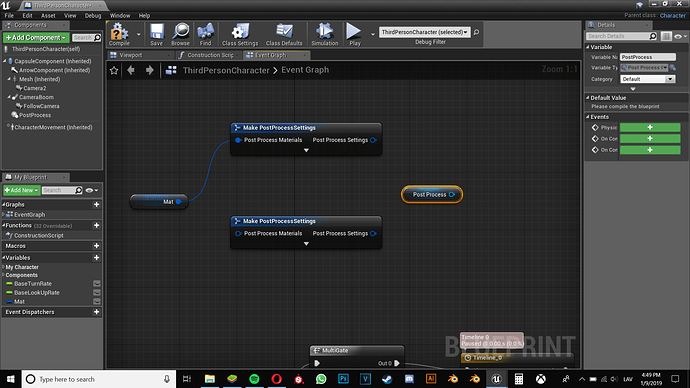 The node is called Set Settings, if you drag a pin off the Post Process, you’ll find it easily. 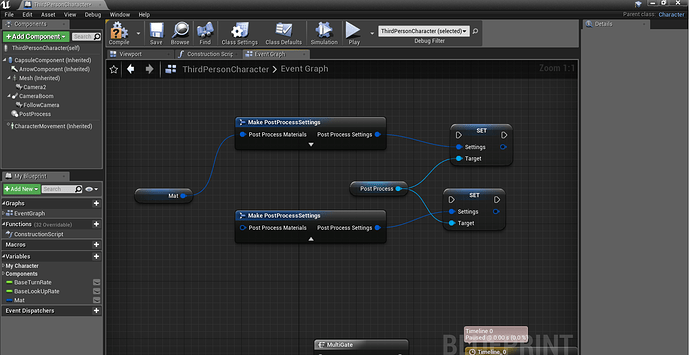 Ok, I have the node tree you showed me now. So my last 3 questions are:

2 and 3. Select the Mat variable (not in the graph, but in the list of variables) and in the Details panel add an array element and choose Assert Reference; select your material there.

Do I connect in the end of the sequence?
Also, do I have to plug in both inputs of your scheme in one place or different? 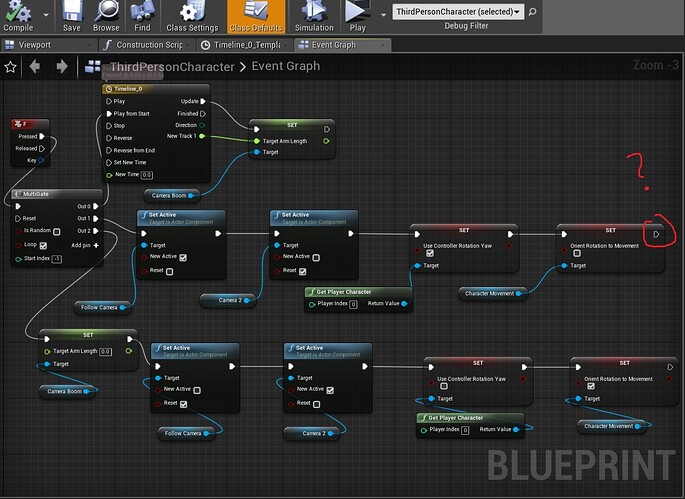 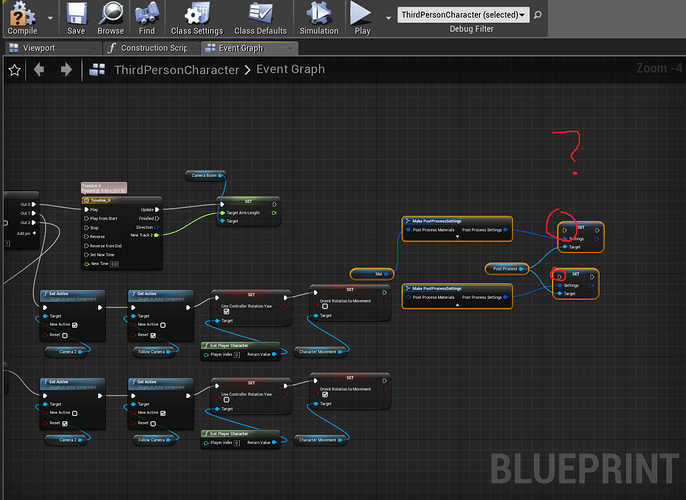 Yes, at the end would be just fine, and yes, one node for each camera, depending on which uses the custom material.

Thanks! You realy helped me a lot.