I am having an issue with parent/child relationships in parent anim instances.

I have an class called “BP_AnimBase” which derives from “Anim Instance”. The plan for this class is that it will perform all common functions for playing a users character animations.

From this class, I have derived a BP class named “TestDerivedAnimation”

I then have a character class that sets the anim instance in its construction script to the TestDerivedAnimation class.

In the base class, “BP_AnimBase”, I want to set the “Speed” and “IsInAir” variables during the “Update Animation” event.

In this event, the result of “Try Get Pawn Owner” is always returning as invalid.

If I put the same logic into the “TestDerivedAnimation” class it works fine.

The event itself runs in both the child and parent, so that’s not a problem, it just appears to be out of scope which seems odd since it should just be the same class with the same owner.

I could move the logic down into the derived class, but that defeats the purpose of making my characters skinnable without needing to attach logic to them.

This is the BP. From the derived class if prints Valid 1/2 of the time. From the parent class it only prints Invalid

Discovered how to do this. In my derived animation, right clicking the title bar of the event node and adding the call to the parent class achieves the desired result. 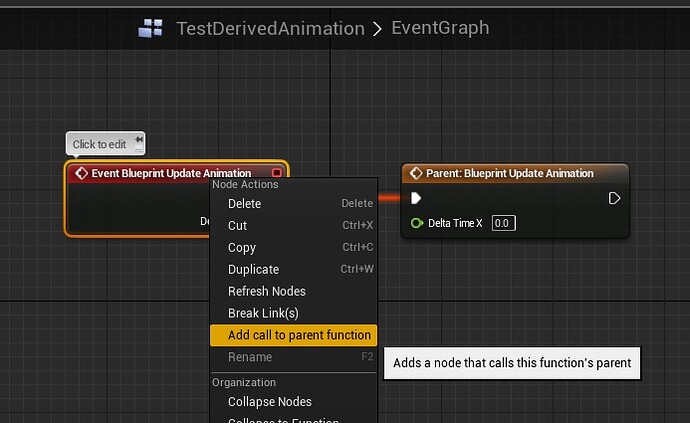