So, the rocks in the effects cave are pretty good for building with. There are two in particular that I like for making a cave in my project. The issue, however, is that they are cylindrical and not overly wide. I started by just rotating them and stacking them next to each other, but that was problematic for roofing/ceiling, so I was stretching them into more flat panels to cover more area with fewer meshes. But the more I get to thinking about it, the more I don’t like that idea… for one, there has to be a limit to how much you can stretch them before they start to distort and not look as nice, and secondly because both front and back have to be rendered since it’s a single mesh and you see it, so I fear that will waste a good bit of rendering bandwidth that doesn’t need to be used on things you’ll never see.

The question is this: How do I take one of those tall cylindrical rock meshes and split it and unroll it so I can have a flat panel type mesh where the texture is only on the one side? I’ve been using Blender 2.70a as a learning ground, but the only thing I’ve found dealing with unrolling a mesh is to make a “paper construction net” out of it (adding paste tabs and the like to it… I’ve not tested it, perhaps that will work and I just need to cut tabs, but it also says it draws lines for folds/etc, which would likely be problematic when it comes to putting my textures back on?). Since I can’t find anything out there, I thought I’d ask here since this is where the meshes came from to begin with, and this is where the meshes will be used. (so far I’ve exported it from UE4 and imported it into Blender, but I don’t know if I even have the material/textures in Blender… the grey mesh is all I’ve seen so far, and I have no idea where to start to flatten it, let alone get the textures mapped back on so they look nice).

I’m looking for any tutorials or guides (or help) that will get me on my way to efficiently building my starter level for my game… keeping in mind that while I can follow steps and have a vague understanding of using Blender, I’ve only been doing -anything- with 3d/modeling for the past week now, about 5 hours inside of blender (and following several tutorials to build things for practice). I understand most of the lingo, but I don’t really know how to do much more than make a UV map and paint it (watched a good “mushroom” tutorial that had me actually do it, so now I have some cartoon mushrooms in a map!.. lol).

Any ideas, suggestions, or pointers to places I can look?

What is it about the rocks that you like? The material?
You could try just modeling a much bigger, and one-sided, block, and apply the same material to that.
If you need some knobbly variation in the geometry, a “noise” modifier on a block will give you some interest, or you can push around vertices manually until it looks right to you.

Well, for starters, I currently completely suck at “making things”… I tried making a wall section, exported the mesh to UE4, and applied the material that’s on the current cylinder rocks… and it looked like complete ****

… I’m guessing I need to do more than a flat-ish wall with some lumps on it, but I have no idea what. I’m sure there’s something going on with mapping and resolution and all that, but I don’t see how to get the texture/material out of UE4 and into Blender (which also implies just unrolling the base mesh from the pillar won’t work either).

Part of why I want the rock from the UE4 content is, it’s just **** pretty and high quality. Most “free” models/mesh/etc I’ve been finding are really amateurish… if I wanted crappy looking, I’d do it myself

Anyway, I hope someone knows how to do it, or knows where a good tutorial for doing it in Blender would be. I have about 30 things I’m ready to try (foot steps, transitioning from 3rd to 1st person, inventory, hud, weapons, and even bringing in a nice high quality mesh for the character), but most of it is pointless unless I have my starting cave to spawn in

Only way to get better is to do the work

What I’d suggest is, take a look at the rocks you like in wireframe mode so you can see how they are made, then use what you learn to start making your own.

Biggest trick with rocks is don’t start too high poly. Keep it simple and angular lest you end up with things that look like potatoes ^.^

Also, those big rocks in the Effects Cave look like they were made in Zbrush. You could download a demo of Zbrush or Mudbox and have at it painting lumps on a flat piece of geometry.

As a cheap way to roughly do what you are looking for what i would suggest is - create your cave inside Unreal Editor, go nuts with rock placement and rotation etc so that everything looks great - then export the rocks/cave together and import into ( Blender you are using right? ). Figure out how to also get the textures showing up inside the app after import just to confirm all uv mapping is still in place. Then basically go about combining all the rocks into a single mesh, select all the visible polygons ( ie the interior surface of the cave ), invert the selection and delete all the stuff you don`t see…

After that just import the optimised cave mesh into Unreal as a static mesh and you should be good to go.

Beyond actually learning more indepth modelling, sculpting and uv-ing workflows i think that should achieve roughly what you want. It should also give you some practice of every-day mesh editing stuff which will be useful without getting into hardcore asset creation…

Has anyone had any luck exporting an fbx from unreal and porting into blender? I’ve tried and the only thing I get in blender is an oddly shaded box :(. I just want to import things over there to see how they’re made and mainly how they’re uv wrapped.

You can open the objects in the Static Mesh editor in the Unreal Engine, and turn on wireframe, and turn on “show UVs” for each UV channel.
Also, you can double-click the material to see how it’s set up. It turns out that the rock material from the cave is actually somewhat complex, and would not port into FBX files. 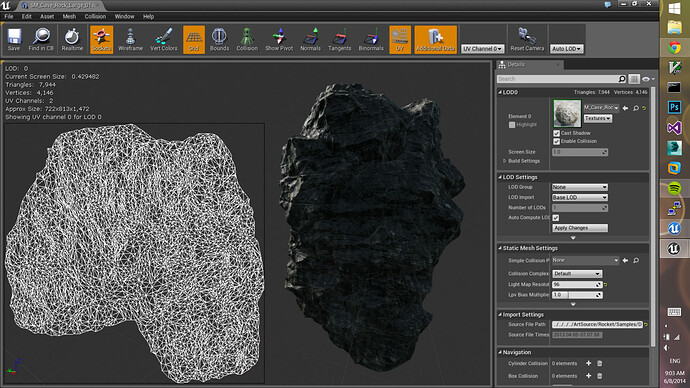 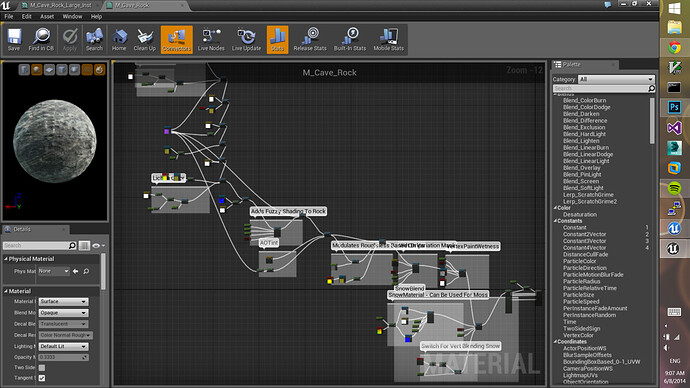